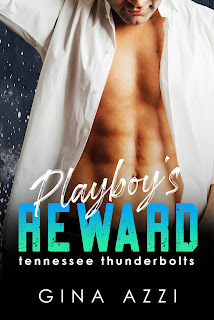 Note: An advance reader copy (ARC) was provided by the author via Wildfire Marketing.
Playboy's Reward is the fourth book in Gina Azzi's Tennessee Thunderbolts series, and this time around, we've got Damien Barnes, left wing for the Bolts who happens to come from what's considered "old money" back in Connecticut. When he learns that his downstairs neighbor has been RSVP-ed to her tenth high school reunion without her permission by her mother, he decides to offer himself up as her fake boyfriend. Harper Henderson is gorgeous, witty, and smart, and she's proven to be good company, so what's Damien got to lose doing this one favor for his neighbor, especially when she's able to return the favor when he needs a date for an important family event? Except the lines soon blur, and the guy with a reputation for being a playboy finds himself wanting something real with this woman who's tilted his world on its axis? Being with Harper would be a reward for Damien, but if he isn't careful, losing her could be his punishment.
The meet-cute between Damien and Harper was definitely a memorable one, and possibly my favorite in the series so far. It was rather clear from the get-go that these two shared one heck of a connection. Things played out pretty much as expected. Damien is the guy who doesn't want to do commitment because of family issues, and Harper is the girl who changes everything for him. The conflict is one you see coming, particularly because Damien always has it in the back of his mind even as he begins to fall for Harper. Playboy's Reward follows a familiar pattern, but is still an entertaining four-starred read.
-------------------------
Read my reviews for the Tennessee Thunderbolts series: