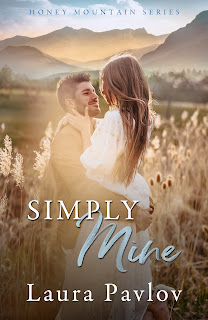 Note: An advance reader copy (ARC) was provided by the author.
Simply Mine is the fourth novel in the Honey Mountain small town romance series from Laura Pavlov. This is Charlotte Thomas's story, and it's a falling-for-your-best-friend's-sibling romance with some definite friends-to-lovers feels. At twenty-five, she's pretty happy with her life. She has her father and her sisters, her work as a kindergarten teacher, and her friends--all in her hometown of Honey Mountain. Now, her best friend is getting married, and Charlie realizes that means that Ledger Dane will be back in town and for an extended period of time compared to his past visits. He's her best friend's older brother, an all-around good guy, and a highly successful architect in the city. He's also the guy Charlie crushed on when she was a teenager, with the two of them sharing a couple of unforgettable moments. He says he wants to rekindle their friendship over the next two weeks, but soon, they're engaging in what they know can never be more than a fling. He's never been one for the idea of falling in love and happily-ever-afters, but she believes in it all. At the end of the two weeks, they'll continue on with their friendship while he returns to the city, and she stays in town. Turns out that's easier said than done.
Ooh, this new Honey Mountain series addition surprised me, and I don't mean that in a negative way. There was heart and heat, as is to be expected, and as always, I enjoyed the family dynamic among the Thomas sisters plus their father, and of course, on Ledger's end, Jilly, Garrett, Kalie, and especially, Nan, were wonderful as well. There were also all those lighthearted moments, highlighted by wit and humor. And while the first three books had some bits of angst to them, it almost felt as if this fourth one had a smidgen more. Maybe it was because of the fact that what started out as a two-week fling between Charlie and Ledger was clearly more than that, and everything that led into the end of those couple of weeks and followed afterwards felt more emotional to me. I appreciated how supportive those who mattered most were towards Charlie and Ledger, and I loved seeing these two truly come into their own as a couple. They earned their happily-ever-after, which is why Simply Mine gets 4.5 stars, and I look forward to Dylan's book up next!
-------------------------
Read my reviews for the Honey Mountain series: