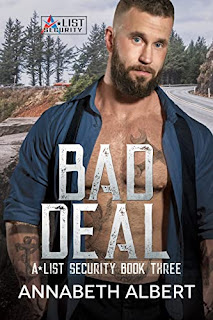 Note: An advance reader copy (ARC) was provided by the author.
Bad Deal is the third novel in Annabeth Albert's A-List Security series, and this go-around, we have none other than Harley Burton, a forty-year-old former SEAL with the rank of Senior Chief and one of the owners of the titular security company. Harley was a supporting character in the first two books, Tough Luck and Hard Job, but his story can be read as a standalone if you're new to either the series or the author. He's paired with Ambrose Sterling, the forty-one-year-old creator of a television show with a strong following. Ensuring Ambrose's safety is all part of the job; pretending to be his boyfriend at a family gathering, however, is a whole 'nother matter. Harley has never thought himself as boyfriend material, and he's never dated a man before, but something about Ambrose makes him eager and willing to give it his best shot--and maybe make it all real.
This was a really fun read, and it's a great addition to the A-List Security series. Harley was someone that I've been curious about ever since he first appeared in the series starter. He came off as rather quiet and understated, but I liked seeing the more lighthearted side of him. He was protective, which was obviously part of his job, but he also cared a great deal about those who mattered most to him. It was being around Ambrose that allowed Harley to open himself up to other possibilities that he may not have considered a year or so ago. I loved the dynamic between them and seeing them go from a professional relationship to a more personal one that went from friendship to romantic was fun. Of course, cameos from the rest of the guys from A-List Security--whether those with partners or the newbies--was a bonus. Bad Deal easily gets four stars.
-------------------------
Read my reviews for the A-List Security series: