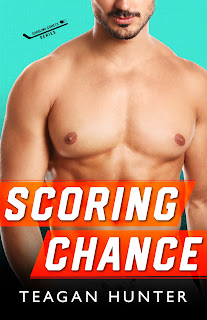 Note: An advance reader copy (ARC) was provided by the author via Valentine PR.
Teagan Hunter releases the fifth addition to her Carolina Comets hockey romance series, and Scoring Chance is where readers finally get Miller's story! Yep, Grady Miller is finally going to see if he can take his shot and score with the beautiful woman behind the best donuts around. Unfortunately for the twenty-four-year-old professional hockey player, he may have messed things up when he didn't recognize twenty-eight-year-old Scout Thomas when he approached her at a party against him. Considering the fact that he regularly goes to Scout's Sweets, aka Scout's food truck serving sugary goodness, the faux pas was a massive one. Add to that his tendency to be awkward--and oh, he happens to be a virgin, too! On Scout's end, the thought that the guy you've been crushing on has no idea you and the woman who's been serving him donuts simply leaves her, well, crushed. But Miller is determined to, at the very least, forge a friendship with the book-loving baker. He hopes that maybe, given a chance, she'll see Grady the guy rather than Miller the hockey player, and if that happens, could they possibly be more than "just" friends?
Miller, Miller, Miller... Could the guy be any more endearing?! There was no doubt that he was a standout supporting character from the moment he made his presence known in the Carolina Comets series, and that presence was very much felt since I'm pretty sure I wasn't the only reader who'd been eagerly awaiting his book to be penned and published by Teagan Hunter. My heart squeezed in empathy as his back story was coming to light, and it was clear that he deserved to be with someone who would appreciate every bit of him. While Scout may have seemed like such an opposite of his, I loved how real she was. She was flawed and had her insecurities, but she was also someone who simply wanted to be seen, which was why Miller not recognizing her at the party understandably hurt. As always, this author delivers a heartwarming romance with a good amount of heat, punctuated by humor and sprinkled with a bit of angst. I'm really looking forward to the next book in the series; I suspect I know who are being paired up. Even if I'm wrong, I'm still excited for it, with hopes that it's as good as Scoring Chance, which receives five stars.
------------------------
Read my reviews for the Carolina Comets series: