Review: Two a Day by Lauren Blakely (Ballers and Babes #4) 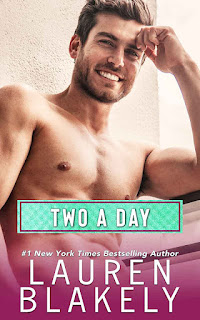 Note: An advance reader copy (ARC) was provided by the author.
Back in November of 2016, Bloomsbury Spark published Out of Bounds by Lauren Blakely, and it was the fifth of six books by the author that I'd read that year, which is when I'd discovered her writing. Having bought her rights back, Blakely has reworked the story and characters, although retaining a few details here and there, making Two a Day, the first in what was originally her The Girlfriend Playbook series but has now been integrated as a standalone in her Ballers and Babes series, a nearly brand-spanking new read. If you're a longtime reader of hers, keep an eye out for a number of Easter eggs, which Blakely is known for, in this book.
When twenty-nine-year-old lawyer Brooke Holland decides to head to the beach after a trying week at work, she never expected to rescue a hot guy who suffers a paddle board mishap. He introduces himself as "Andrew", but soon enough, she recognizes Drew Adams, twenty-eight-year-old quarterback for the Los Angeles Devil Sharks. The chemistry is scorching hot, and their connection is begging to be explored even further. But then Fate by way of new job responsibilities and a trade has them pumping the brakes on their promising romance. You see, Brooke handles legal work for the Los Angeles Mercaneries; and Drew? Well, it turns out his trade makes him her team's new QB. They're simply smitten, but now, it's turned complicated.
I remember enjoying the original novella back in 2016, but Lauren Blakely has definitely taken things to an even sweeter and more steamy level. Drew and Brooke had that sort of spark at the beginning that couldn't be ignored nor be shoved into the friend zone. Their text message exchanges were highly entertaining, and the supporting characters certainly were memorable, some of whom I wouldn't mind reading more about in future books. Fast-paced and with Blakely's noteworthy writing, especially when it comes to her romantic comedies with a sports angle, Two a Day is a terrific 4.5-starred former series starter turned series addition.
Release Date: 14 October 2022
Date Read: 14 October 2022
Learn more about Lauren Blakely.
Purchase Two a Day on Amazon | Apple Books | B&N | Kobo.