Review: A Little Too Late by Sarina Bowen (Madigan Mountain #1) 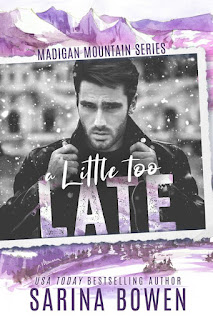 Note: An advance reader copy (ARC) was provided by the author.
Well, talk about getting this multi-author trilogy off too a heck of a start! Sarina Bowen delivers a second-chance romance with all the feels in A Little Too Late, the first in the Madigan Mountain series, wherein she teams up once again with Rebecca Yarros (A Little Too Close) and Devney Perry (A Little Too Wild) to write about three estranged brothers from Penny Ridge, Montana. Bowen focuses on the eldest among the Madigan brothers, thirty-two-year-old Reed. It's been about a decade since he last set foot in his hometown, what more Madigan Mountain, the boutique resort owned by his family for several generations. It's also been around the same amount of time since he last set eyes on Ava Aichers, his first--and only--love. So imagine his shock when he finally returns to Madigan Mountain and learns that Ava's been working at his family's resort for almost ten years. He's only back to ensure that his father isn't being taken advantage of as the older man set to sell the resort, but being in the place he once loved and around the one woman he's ever given his heart to makes him wonder if hope remains or if it's simply a little too late.
Ah, Reed and Ava... While the former ran from his issues with his father and left his younger brothers, Weston and Crew, behind in Montana and created a successful career in the venture capital world in Palo Alto, California, the latter ran to the place that her ex, aka Reed, couldn't stand to be around. I'm not sure what you call the moment when exes see each other again after years apart--meet-cute redux? meet-cuter?--but Reed and Ava certainly had a memorable one. The back story regarding their break-up was heartrending, but it did give me a greater appreciation for what it took for both of them to move forward as a couple. I liked that there wasn't this constant rehashing about what happened ten years prior when it came to their relationship, although there was quite a bit of stubbornness with regards to Reed and his father, plus the stilted communication among the brothers. While Reed and Ava get their happily-ever-after--as they should!--there is still a continuing story arc with regards to the resort and the relationships of the two younger Madigans and their father and oldest brother, so I'm certainly looking forward to reading how it all gets resolved in books two and three. Sarina Bowen has definitely set the bar high with A Little Too Late, which I'm giving five out of five stars to.
Release Date: 04 October 2022
Date Read: 02 October 2022
Learn more about Sarina Bowen.
Purchase A Little Too Late on Amazon | Apple Books | B&N | Kobo.