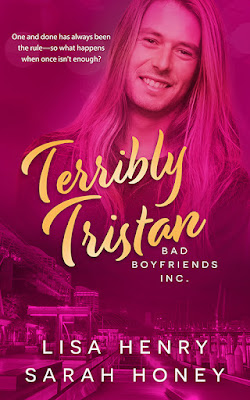 Terribly Tristan
(Bad Boyfriends Inc. #3)
by Lisa Henry & Sarah Honey
Date Released: October 18, 2022
Pride Publishing
About Terribly Tristan
One and done has always been the rule—so what happens when once isn’t enough?
Leo Fisher is the outward picture of respectability, just like his parents raised him to be. But when he inherits a crumbling terrace house from his great-uncle, he also inherits a tenant who turns his world upside down. Tristan is brazen, gorgeous, experienced and utterly fabulous. He’s everything Leo is not—so why is Leo drawn to him? Leo has always made the right choices—the sensible choices—yet here he is, hooking up with his tenant, who’s a rent boy.
Tristan Montague is not a rent boy. Not exactly. He’s a Bad Boyfriend. For a fee, he’ll turn any date into the kind of disaster that will have his client’s unsuspecting parents begging them to date anyone but him. Boyfriending for cash is fun—but for real? No thanks. As far as Tristan is concerned, there are far too many flowers in the garden of love to settle on just one bloom. Instead, he flits happily from lover to lover like a glorious gay butterfly, and he doesn’t do repeats.
Except when he meets his cute, awkward landlord Leo, Tristan finds himself rethinking his ‘no repeats’ rule. He plans to show Leo that he, too, can be a glorious gay butterfly, but when physical attraction becomes something deeper, Tristan realizes he might be ready to hang up his wings and date…for real.
But in order for Leo to take a stand against his overbearing parents, Tristan will need to play the Bad Boyfriend one last time—and it’s going to have to be spectacular. 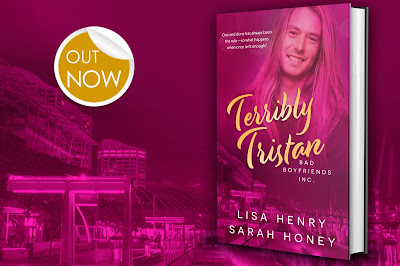 An Excerpt from Terribly Tristan
On an otherwise unremarkable Saturday morning, Tristan Montague was woken by a hard pounding. And not the sort he liked. The sort he liked, he realised as he unglued his eyelids, wouldn’t be forthcoming at all—last night’s hook-up was still crashed out beside him flat on his back, with his mouth open as he snored. This pounding, unfortunately, was coming from his bedroom door.
“Wha?” Tristan grizzled. The house had better be on fire, seriously, because it was only—he flopped an arm out, fingers searching for his phone on his nightstand—11.37 a.m. That was inhumane for a Saturday. Unless it was Sunday—but no, it would be just as inhumane for a Sunday.
The pounding on his door continued.
Tristan rolled out of bed and shuffled to his door. He pulled it open and glared at Harry, his housemate.
“Tristan!” Harry exclaimed, then his wide-eyed gaze travelled down Tristan’s naked body and back again. By the time it returned to his face, Harry was bright pink in that adorkable way that made Tristan want to ruffle his hair, pinch his cheeks and possibly rail him over the back of the couch into next week. Harry was out of bounds, though. Not only was he like the awkward little brother Tristan had never had, but Harry was also stupidly in love with Jack, their other housemate. They gave each other such heart eyes over breakfast each morning that Tristan half expected the local wildlife to burst into song every time, Disney-style. The local wildlife, in their case, being the mice infesting the walls and the huntsman spider that lived in the shower. “Tristan, you’re naked!”
There wasn’t really anything Tristan could say to that, so he nodded and waved his hand in front of himself like a showcase model on a television game show.
Harry’s blush extended all the way up to his glasses. “Like, really, all the way, naked.”
He sighed. “Did you wake me up just to tell me that?”
Harry blinked at him. “No! I woke you up to tell you that Mr. Erskine is dead!”
“Oh.” Tristan felt a moment of actual regret. Their landlord was at least six hundred years old, and batshit crazy in the best possible way. He loved to drop in and collect the rent money from the Milo tin in the kitchen, then spend hours regaling Tristan with stories of the Cross back in the seventies. And Tristan loved listening, because Kings Cross back in the day had been wild. “I thought the Milo tin was getting full.”
“I thought he’d just forgotten to collect the rent.”
Tristan sighed again. “Wow. That really, really sucks. Mr. Erskine was an awesome old bloke.”
“He once offered me a hundred dollars to play with his hair,” Harry said, his brows pulling together. “Which didn’t make any sense, because he was bald.”
“Well, not everywhere, probably.”
Harry blinked rapidly. “Oh. I didn’t think of that.” His mouth turned down. “Ew. Was he sexually harassing me?”
“To be fair, I think he sexually harassed everyone without realising it,” Tristan said. “Oh, man. What’s going to happen to this place, do you think?”
Harry looked slightly panicked. “I don’t know! I can’t afford to live anywhere else!”
The old terrace house in Dickson Street, Newtown, was a complete dump. It was the rotten, blackened tooth in an otherwise pristine smile of gorgeously renovated veneers, but it was cheap. Well, cheap by Sydney standards, at least. Which wasn’t saying much. Tristan would be okay whatever happened, but Harry and Jack were on incredibly tight budgets.
“I mean, these things take months, right?” Tristan asked. “Wills and probate and all that bullshit. And there’s probably some law that you can’t just throw tenants out on the street without notice. Isn’t there?”
Harry chewed his bottom lip. “I don’t know.”
“Hey, don’t stress about it,” Tristan said, even though it was pointless, because Harry stressed about everything. “It’ll all work out in the end.” He lifted his nose and sniffed as the scent of bacon and eggs cooking reached him, and his stomach growled. He brightened. “Is Jack making breakfast?”
Harry blocked him as he tried to step out of the room. “Tris!”
“What?”
“You’re naked.”
“Oh yeah.” He reached around to grab his robe off the hook on the back of his door. “Breakfast first, then crisis, okay?”
Harry nodded unhappily, and they headed down the stairs.

Sarah Honey started life in New Zealand. She came to Australia for a working holiday, loved it, and never left. She lives in Western Australia with her partner, two cats, two dogs and a life-size replica TARDIS.
She spends half her time at a day job and the rest of her time reading and writing about clueless men falling in love.
Her proudest achievements include having adult kids who will still be seen with her in public, the ability to make a decent sourdough loaf, and knowing all the words to “Bohemian Rhapsody”.
Horribly Harry will be her sixth published novel in collaboration with Lisa Henry.
Connect with Lisa
Website | Blog | Facebook | Twitter | Instagram | Goodreads | BookBub | Newsletter
Connect with Sarah
Facebook | Twitter | Goodreads