Review: Butt-Dialing the Billionaire by Annika Martin (Billionaires of Manhattan #7) 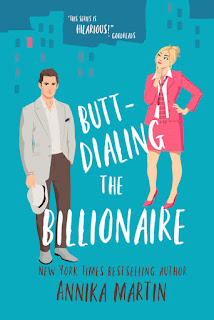 Note: An advance reader copy (ARC) was provided by the author via Valentine PR.
Annika Martin is back with the seventh book in her hilariously addictive Billionaires of Manhattan series! Butt-Dialing the Billionaire is the title, with the butt-dialer being Jada Herberger, senior designer at SportyGoCo, and the billionaire none other than Jaxon Harcourt Eadsburg von Henningsly, heir to the empire--of which SportyGoCo is part of--left behind by his parents. When Jada decides to mockingly imitate their new head honcho, she gets well-deserved laughs and guffaws from her co-workers. Unfortunately for her, however, a bit of ill-timed butt-dialing occurred then and there, with none other than the target of said mockery being on the other end of the line! Mr. Five-Part-Named Mega-Billionaire goes on the hunt for the perpetrator of what he feels was a disparaging imitation of him. Fortunately, though, it looks like he's grown tired of his search, and not a minute too soon because Jada has to re-focus her attention towards the company's new and less than stellar gopher, Jack Smith. He's terrible and rather clueless at his job, but over time, Jack and Jada grow closer. Turns out there's more to him than meets the eye...and soon enough, Jada will realize how much of a darn understatement that will be.
Just like the six books before it, Butt-Dialing the Billionaire made me laugh and had me falling in love with the main characters and their story. This enemies-to-lovers romance had an Undercover Boss feel to it, and seeing how out of his element Jack was definitely turned out to be quite entertaining. There was a lot of growth and development on his end because if I'm being absolutely honest here, he was pretty much a jerk for a good portion of the book. But the more time he spent around and with Jada--as well as the other office peeps over at SportyGoCo--the more I saw a side of him that I wasn't all that sure existed soon after the death of his parents. Speaking of Jada, I seriously liked her! She was loyal to and cared for those around her, recognizing the family that she and her co-workers had created within the company and giving a personal touch in a professional setting. This book was exactly what I needed to read on a day where a lot was weighing on me, and I was desperately hoping for a respite. I found it in this five-starred rom-com.
-------------------------
Read my reviews for the Billionaires of Manhattan series: