Review: A Little Too Wild by Devney Perry (Madigan Mountain #3) 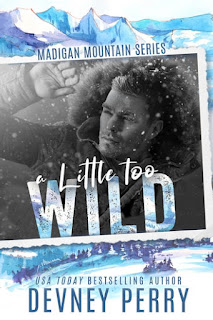 Note: An advance reader copy (ARC) was provided by the author.
Would it be too much to hope that Sarina Bowen, Rebecca Yarros, and Devney Perry come together every now and again to work on a trilogy together? When they released the Hush Note series in 2020, I thought it was a one-off. But here we are, a little over a couple of years later, and this talented trio have rejoined creative forces to bring readers a series about three brothers who begrudgingly find their way back to the place that they once considered home and find true love in the process. Book one, A Little Too Late, was penned by Sarina Bowen and is about the oldest Madigan brother, Reed; book two, A Little Too Close. was written by Rebecca Yarros and features the middle Madigan, Weston. Now, the Madigan Mountain final book, A Little Too Wild, is out in the wild (pun intended!), and Devney Perry ends with the youngest--champion pro snowboarder Crew.
After graduating from high school, Crew Madigan did what his two older brothers did before him--he walked out of the house he grew up in and walked away from his father and their hometown of Penny Ridge, Colorado. It takes twelve years and his oldest brother's wedding for thirty-year-old Crew to step foot on the grounds of their family-owned resort. A lot has changed, but some things have stayed the same. Like say for example, the pull he has towards his best friend's younger sister. Now twenty-eight, Raven Darcy runs the ski program for the resort, and she prides herself in the fact she's never had a thing for Crew. So why is seeing this adult version of the guy who was such a constant in her life stirring something unexpected? Athletes are a no-go for her, but Crew won't be staying, so what's the harm in indulging in this wild connection between them?
I've enjoyed the heck out of the Madigan Mountain trilogy, and Devney Perry certainly closes things out with a five-starred read that's fun and romantic but also with quite a bit of angst that's made me a happy camper (ironic, I know). I loved Crew and Raven together, and I appreciated the creative touch of Crew being the one who crushed on Raven growing up while Raven was blissfully oblivious to it all. These two also had issues when it came to the men in their respective families, although in varying degrees and maybe not so much Weston. Raven and Crew had a great deal in common, especially their love of snowboarding, and the support these two offered each other off and on the snow was one of my favorite things about them. I'm going to miss the Madigans and the mountain that is their home, but it's been a thrill "seeing" this family reconcile and grow.
Release Date: 16 October 2022
Date Read: 14 October 2022
Learn more about Devney Perry.
Purchase A Little Too Wild on Amazon | Apple Books | B&N | Kobo.