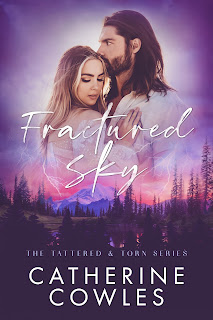 "I like having you here. I think I needed it just as much as you did."

The truth of those words hit somewhere deep in my chest, burning. But it was a beautiful kind of pain. One I welcomed. One that belonged only to Shiloh.

When I tell you that this book has been one of my most anticipated reads, there's good reason for it. Fractured Sky is the fifth and final novel in Catherine Cowles's Tattered & Torn series, and its female main character, Shiloh Easton, is hands down one of the most indelible heroines I've ever come across in my decades of reading any and all genres. From the series starter onwards, Shiloh has been the Easton sibling whose story I've been waiting for most. After the traumatic event that not only changed her life but that of her parents and siblings, too, and forever shattering the idea that nothing bad could ever happen in their small town of Wolf Gap. She was ten when she was taken, and more than a decade and a half later, the memories of her time in that rundown shack still have a grip on her and her family. All she wants is to no longer be seen as a broken victim, and maybe working with someone like thirty-seven-year-old horse whisperer Ramsey Bishop will be a step towards independence. She's also drawn to him in ways like she hasn't with anyone else--as if her fragile, fractured pieces fit in with his. But not everyone approves...
I knew Catherine Cowles was going to save Shiloh's story for last, and oh, my word, but how she's made the wait so worth it. With the glimpses we got of her throughout the first four novels, it was easy to see the lingering aftereffects of what happened when Shiloh was abducted as a child, not only when it came to her but also to those who loved her most. I love her character development in this book, with her taking those necessary steps to step outside of the protective bubble most of her family wanted to keep her tucked away at. Ramsey was the perfect person for someone like Shiloh because instead of forcing her to remain within the confines of what he believed was best for her, he encouraged her with words and actions. In the same vein, she inspired him to move past his anxieties and issues. These two were in such sync with each other that the ten-year age gap was a non-issue, as was the apprehension of some of those closest to them. Naturally, with the romance came the suspense, and Cowles pulled out all the stops with one heck of a twist! I'm going to miss the Eastons and those nearest and dearest to them, but Fractured Sky provided a five-plus ending to what has been such a fascinating series.
-------------------------
Read my reviews for the Tattered & Torn series: