Review: Play Smart by Aly Stiles (Work for It #5) 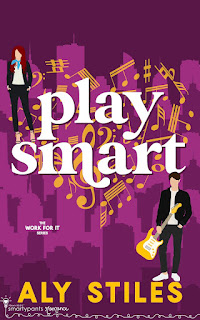 Note: An advance reader copy (ARC) was provided by the author.
Aly Stiles takes readers back to Reedweather Media with Play Smart, the fifth novel in the Work for It series published by Smartypants Romance. This is Stiles's second book in and my third read from the series, with her book--and the series starter--Street Smart and Heart Smart by Emma Lee Jayne being my first two reads. You don't necessarily need to read any of the other books in the series in order to fully enjoy this new one. I've yet to read books three ad four and didn't feel lost or that I was missing anything relatively vital in terms of story or character. But it wouldn't hurt to read these in order.
Play Smart is the story of Nash Ellis, a twenty-four-year-old guy who is more comfortable with music and lyrics rather than numbers and reports. But reality bites, and money is a necessity, so when his roommate manages to get him a paid internship at Reedweather Media, he muddles along. His fellow intern, Paige Andrews, serves as a welcome distraction, even though she sees Nash as more of a source of irritation. But the more they're thrown together, the more she realizes there's more to him than meets the eye. But what happens when he becomes the sole hope when tasked with a mission?
Enemies-to-lovers is one of my all-time favorite tropes, particularly when there's a lot of tension between the main characters. The fact that Nash and Paige don't seem to have a whole lot in common makes their pairing even more interesting, although a deeper look at them both showcases that they had certain shared personality traits. One thing that was obvious was that they had chemistry, and I liked seeing their relationship evolve as the story progressed. Aly Stiles delivers a great romance with wit and angst and two main characters you can't help but become invested in. Play Smart earns four stars.
Date Read: 14 October 2022
Learn more about Aly Stiles.
Purchase Play Smart on Amazon.