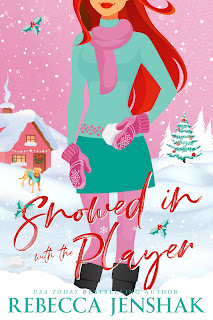 Note: An advance reader copy (ARC) was provided by the author via Valentine PR.
Snowed In with the Player is the first book in Rebecca Jenshak's new Holiday with the Players holiday romance series. Compared to her previous novels in her Valley U book universe, this new series starter is a quicker read, more novella in length, I think. We're introduced to Holly Walters, a freshman at Valley University alongside her twin sister, Stella. After surviving their first semester as college students, Holly and Stella are eager to get to their family cabin for a fun weekend before they head home for the holidays. When they discover that not only is their brother already at the cabin, but that he's invited a few friends along with him. One of them just happens to be Theodore Radford, Valley U's football team's star running back and their brother's best friend. Oh, and Theo is the same guy that Holly's been crushing on for the past two years. He's a beast on the field, but a complete teddy bear off it, thus earning the nickname "Teddy". She's usually shy and awkward around him, but what happens when she gets snowed in with him...alone?
This was such a cute read, one that gave all those holiday romance-y feels while keeping things relatively lighthearted throughout. Holly and Teddy may know each other, but I enjoyed seeing them go beyond all that surface knowledge and realize that they had more in common than either of them may have realized. I also liked the dynamic between the siblings--Holly and Stella and their big brother, Felix--and how each had their own personality but was still quite protective of the others. I know Stella's book is up next, and after what happened in this series starter, I'm certainly eager to find out how everything will play out going forward, but I'm also hoping Felix and a couple of his other teammates and friends also get their own holiday-themed books. But as far as Holly and Teddy's is concerned, well, Snowed In with the Player and its holiday goodness easily snags 4.5 stars.
Release Date: 25 October 2022
Date Read: 20 October 2022
Learn more about Rebecca Jenshak.
Purchase Snowed In with the Player on Amazon | Apple Books | B&N | Kobo.