Review: A Little Too Close by Rebecca Yarros (Madigan Mountain #2) 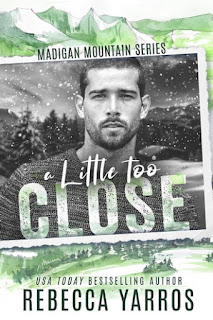 Note: An advance reader copy (ARC) was provided by the author.
Rebecca Yarros's A Little Too Close is the second novel in the multi-authored Madigan Mountain trilogy, following Sarina Bowen's A Little Too Late and preceding Devney Perry's A Little Too Wild. We're on to the middle brother in book two, thirty-one-year-old Weston Madigan. He left his hometown of Penny Ridge, Montana eleven years ago and went on to become a helicopter pilot in the army. When his older brother calls and tells West he needs him, West heads back to help with the family-owned Madigan Mountain Resort--back to the place that was once his home, littered with memories that both warmed and broke his heart. The transition from the military to civilian life isn't overly terrible, and you'd think he'd be used to sharing his space with other people, but when he's stuck sharing living quarters with the resort's resident photographer and her ten-year-old daughter, things are bound to get complicated. Because trying to not get attached to spunky Sutton and not be attracted to her twenty-nine-year-old mom, Calliope "Callie" Thorne, is more difficult than he'd ever expected because they're already a little too close.
This book! Gah! It gave me all the feels. I'm a sucker for a well-written single parent romance, and throw in some slow burn with the grumpy/sunshine dynamic plus a kiddo who's a scene-stealer, and well, I'm a happy puppy. Rebecca Yarros brought the lighthearted moments and a peppering of angst, and she had me becoming quite emotionally invested in West and Callie, as well as the home they were creating with Sutton. West's fractured relationships with his oldest brother, Reed, and his recovering alcoholic father, Mark, and trying to navigate through all the anger, hurt, and resentment was another thing that held my attention and my heart. Seeing both West and Callie lower their respective guards and evolve from near strangers and forced upon housemates to friends then lovers and more made my heart feel full. The one thing that held me back from giving this a five-plus-starred rating was a continuity issue regarding the Madigan family home from the series starter to this new second book. Also, the blurb mentions it being nine years ago that West and Callie first met, but it was actually eleven years given Callie being pregnant then and Sutton being almost eleven now. Those aside, A Little Too Close is still very much a romance that is worth the read and all my five stars.
Release Date: 11 October 2022
Date Read: 07 October 2022
Learn more about Rebecca Yarros.
Purchase A Little Too Close on Amazon | Apple Books | B&N | Kobo.