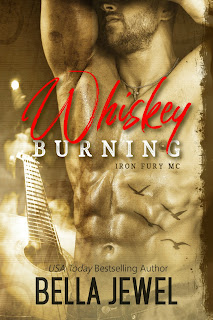 Bestselling author Bella Jewel kicks off her new motorcycle club romance series, Iron Fury MC, with a hell of a great love story between the darling of country music and a member of an MC. Scarlett Belle was only seventeen when she landed herself a contract and now, she's a bona fide country music superstar. But five years in and even as her career continues to skyrocket, Scarlett finds herself adrift in all the controlled chaos that her life has become. The last thing she expects is to find a tether in the form of a man named Maverick. He gave her calm with his voice alone, but when she sees him riding astride his bike beside her tour bus, the connection between them becomes even stronger. Maverick is equally intrigued by Scarlett. She's the first woman since he lost his Old Lady who's stirred such strong emotions from within. But when a not-so-clear but very present danger to Maverick's club and Scarlett's past collide, sides will need to be taken, and whoever picks the wrong one could very well be left to burn to ash in the flames of vengeance. Will Scarlett and Maverick's fledgling relationship survive whatever lays ahead?

Jewel had me from the get-go with this fantastic story. I loved how Scarlett and Maverick had this connection without either one ever really getting a look at one another and how they fostered that into something that meant a great deal more. There was no rushing their story, and yet it never felt as if the author was letting them--and her readers--merely meander along until the highlights came along. Scarlett's ex does his damage in this first in the series, and yes, it does end in a cliffhanger, even though Jewel insists it isn't really much of one. Nothing much is resolved in this series starter, especially when it comes to the threat to both Scarlett and the MC. We do get a peek of sorts as to which couple's story is going to be tackled next and I'm definitely intrigued how it's all going to play out between the two. We also have glimpses into another member of the MC plus one more who may or may not be a peripheral character. Suffice it to say that Bella Jewel has my attention with this new series of hers, and I'm already counting the weeks until I  have the second book in my greedy hands. I'm giving Whiskey Burning five stars. ♥