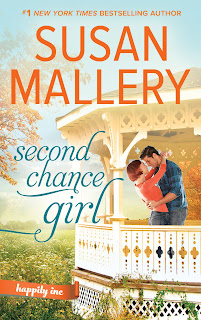 We're back in the town of Happily Inc, California and we're on to the second story in the Happily Inc series from bestselling author Susan Mallery. Second Chance Girl turns the spotlight on the next of the Mitchell brothers, Mathias, an artist his own siblings consider the most gifted among them but whose confidence was shattered by the person who should have encouraged him the most--his father. Add to that the revelation that tossed into chaos the brotherhood among the five Mitchell boys, especially the special bond Mathias shared with his fraternal twin brother Ronan, who turns out to NOT be his twin after all. With his father's betrayal and everyone in his family on unsure footing, the last thing Mathias wants is to become emotionally involved with anyone. However, his neighbor and friend, Carol Lund, was slowly but surely making Mathias take notice in ways he never dared before.

If you read the synopsis for the book, you think that you're getting the next Mitchell brother and whoever he's paired with, but nope! Aside from Mathias Mitchell and Carol Lund's love story, you get the royal romance between Carol's sister Violet and Ulrich Sherwood, Duke of Somerbrooke. Violet and Ulrich have met each other before, but while Violet remembers the eighteen-year-old boy who treated the awkward fourteen-year-old like she was worth his attention, Ulrich doesn't recall Violet at all. When he arrives in Happily Inc, he accuses Violet of stealing from his grandmother, an accusation which Violet finds insulting and quickly disproves. Ulrich may be a duke, but instead of being dashing, he turns out to be rather dastardly in Violet's eyes. He wants nothing more than to make amends for his bad behavior, but could Ulrich have also already found "the one" in sunny California?

Carol's and Violet's romances are different, but they do have that "second chance" feel to them, though the one involving Carol and Mathias happens much later in the story. If I'm being perfectly honest here, I much preferred Violet and Ulrich's story than Carol and Mathias's. The connection between the latter seemed to take much longer to not just be established but also to come off as believable. While the sisters had their own share of insecurities, Carol came off as woeful while Violet was winsome, maybe because the Carol thought herself unworthy of Mathias's attention while Violet had a bit more backbone. The drama between the Mitchell brothers and their father and mother continues here as well, and I am seriously not a fan of either parent. I'm not sure who the third book in the series is about, but I hope the family issues are resolved by then. Second Chance Girl garners four stars. ♥

Read my reviews for the Happily Inc series:

You Say It First (book one) - four stars - My Review