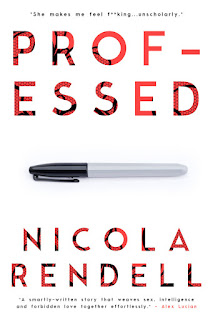 Everybody loves a freebie, and when it's a freebie in the form of an eBook written by one of my go-to authors? Yes, please! Though if we're being totally honest here, it was more of "Gimme, gimme, gimme! NOW!!!" Cough. Anyway, Professed was Nicola Rendell's debut release in 2016, and since I had yet to read her first two releases--the second one being Confessed, which was a follow-up to Professed but can be read as a standalone--I would have been absolutely nuts to have said "no" to getting my hands on that first book for free since Rendell has made it available as such on major e-retailers. So, if you haven't gotten around to reading it, grab it now. On to the review!

Professed is a teacher-student romance set in Yale University that has twenty-year-old college junior Naomi Costa and Dr. Benjamin Beck, thirty-eight-year-old professor and the new master of the residential college that Naomi belongs to. When Naomi and Ben meet, it's at a modern-day masquerade ball organized by a secret society within the university. This meeting leads to them engaging in the most unforgettable sex either one of them has ever experienced. The next time they lock eyes on one another, however, the reality of their situation has them stymied. There's no denying their one-of-a-kind connection, but with his job and her scholarship at risk, to what lengths are either one of them willing to go to in order to pursue the kind of love Ben never even believed existed?

The wit and humor I've come to associate with Nicola Rendell is more muted in her debut release. It's still there, but not as pronounced, and that isn't necessarily a bad thing--just different. That first meeting between Naomi and Ben was what caught my attention, so I was pretty surprised that the secret society thing wasn't as prominent in the rest of the story. Another niggling thing was Ben being given the title of "master" by the university, a title that Yale announced they would no longer use in April 2016. As far as the romance of Naomi and Ben goes, however, well, that I quite enjoyed, even though I felt that there were times that Naomi was thinking more maturely than Ben was. I liked the romantic nature of the love notes between the two of them mixed with all the dirty sex these two were having. The "villian", aka Dean Osgood, was a tad campy, but Professed was still a good four-starred read. ♥