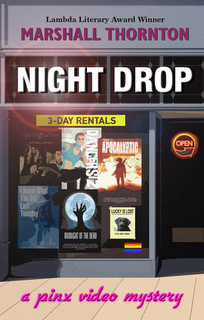 In Night Drop, not only have I found myself an author whose writing I absolutely fell in love with--award-winning author Marshall Thornton--but I've also got a series--Pinx Video Mysteries--that I'll be looking forward to reading more from. This first book introduces readers to Noah Valentine, the twenty-eight-year-old owner of Pinx Video in Silver Lake, California. This particular story is set with the Los Angeles riots of 1992 (Does Rodney King ring a bell? If not, Google him, people!), but these riots weren't what the story itself is about. Instead, we've got ourselves a murder mystery involving Noah's fellow store owner, Guy Peterson, whose disappearance comes to light when Noah pays him a visit to check on him after noting that the man's camera store was set ablaze and to pick up videos that were already overdue. Instead of finding Guy, however, Noah stumbles upon the man's family acting like vultures. He can't help but wonder what it is that's truly going on. Could something sinister have happened, and if so, where is he now? If he does delve deeper trying to find answers, could Guy's fate then befall Noah too?

I do love me a mystery suspense story that doesn't feel as if it's pandering to its reading audience. I read this stuff because I want to spend my time trying to figure out what the heck is going on and who did what and why. That's what this genre is for and why it's got as strong a following as it does. Thornton not only writes well but he tells a story worthy sinking my proverbial teeth into. Then there's Noah, who is a man who doesn't go out of his way to look for trouble, but while he may come off as someone with simple wants and needs, his history and life are more complex than they may seem. The man he was with for four years or so passed away after a bout with illness but again, there's more going on than you may think. Can you tell how I'm trying to keep this as spoiler-free as possible? Seriously, you're not going to squeeze anything more out of me. Just read the book and enjoy this first mystery. See if you can pick up clues and figure out what happened to Guy. Get to know Noah as well, because the man is a mystery himself and I'm excited for what awaits him as the series progresses. Five stars go to Night Drop. ♥