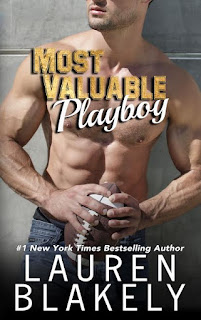 As I bend closer to her, I don't think of a damn thing but her lips, and her request.

There may be quite a number of female romance authors who write from the male main character's point of view, but only a few are able to do it well. One of the best at it is bestselling author Lauren Blakely, whose Big Rock series is a favorite of mine. Her latest release is Most Valuable Playboy, which looks to be just the first in a series of male POV sports romances surrounding one football team. I could be wrong but then I tend to come with hypotheses while I'm reading a book. Weird, I know. But when a book is as good as Blakely's MVP and it's got several supporting characters who were themselves rather enticing and stirred up a bit of my curiosity, well then, of course I'm going to think that there's a series in the offing. Or maybe it's simply wishful thinking on this bookaholic's part.

In this newest Blakely-penned rom-com, we're introduced to twenty-six-year-old Cooper Armstrong, the starting quarterback for the San Francisco Renegades, a position he wants to prove he's more than worthy of after the previous starter--a much beloved fan favorite--retired. So, his focus for the year is solely on his first love--football--but that doesn't mean he can't make time for more philanthropic endeavors, especially with him being the crowd favorite at the annual bachelor auction the team takes part in. As much as he wants to bring in as much money as possible for the children's hospital, however, Cooper is hoping to avoid being won by the team owner's sister. Just when he thinks all is lost, Cooper's tossed one hell of a Hail Mary courtesy of his best friend's sister, Violet Pierson.

I loved that Cooper and Violet weren't just connected to one another by way of Trent, Cooper's best friend and Violet's older brother. These two had a genuinely close friendship of their own, borne not only because they've known each other since he was six and she was five but because they've been there for each other through the years. They bantered and teased, and there was affection alongside the trust and respect. I've lost count of how many times the whole fake relationship story line has been done, but boy, did Lauren Blakely give it a breath of fresh air with her cast of characters, headed, of course, by Cooper and Violet. The fake not-so-unexpectedly feels real for them, but in the case of these two, it felt so damn easygoing that maybe they did need to have it begin as fake in order for the to realize what's been happening between them for more years than either can care to admit.

Aside from the undeniable fact that this author wields that rom-com mojo of hers like a boss, she's also always given her books--well, at least the ones I've read so far--side characters that pique a reader's curiosity and interest. I already know that one of Cooper's closest teammates and the team's publicist are getting a book together, but I'm hoping the other single guys introduced here get their shot at happily-ever-after too, and I'm including one reporter in that mix as well. I did try to wrack my brain, though, as to whether I had read Trent and Holly Pierson's before. I even did a quick search through the books I have as well as Google but to no avail. If they do have a book of their own already, would someone please leave me a comment and let me know? If not, I'm adding it to my Lauren Blakely wish list! But I digress. Most Valuable Playboy scored a five-plus-star touchdown, so do read it ASAP. ♥