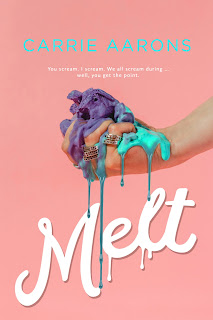 
“How smart am I that I got the girl I crushed on hard in college to fall in love with me?” His hands move to my hips, the heat of them shooting straight through my thin cotton sundress and sending goose bumps over my skin.

“How do you know I’m not just drunk?” I make a study out of his green eyes.

I've loved everything that I've read by Carrie Aarons so far, but I confess that there's something about her romantic comedies that totally appeals to me. Maybe it's the snark--I am, after all, a longtime practitioner of all things sarcasm. In her latest standalone release, Melt, we have ourselves a thirty-year-old food truck mogul who specializes in alcoholic ice cream concoctions (though he does have non-alcoholic ones as well, because hello, you want more than one market) and a twenty-seven-year-old single mother with a career with the US National Park Service. You'd think that Jake Brady having a crush on Samantha Groff when he was a senior and she was a freshman at Madison College would have been at the core of this book, but nope. Carrie Aarons doesn't do the same ol' tired trope that everyone and their mother has done to death. Instead, she's given it an Aarons makeover.

When Jake Brady looks up to find a little girl ready to order some ice cream, it's nothing new. Except the kid named Lennon's mom is none other than Samantha Groff, the freshman he was crushing on in his final year of college. When Fate has them crossing paths yet again, Jake takes his shot and asks Samantha--and Lennon!--out on a date. All goes well...until it doesn't. One temper tantrum--courtesy of Lennon, just FYI--and pat on the shoulder--courtest of Jake to Samantha--later and they go their separate ways without any promises of future dates or communication. But then Fate has other ideas because Jake's and Samantha's criss-cross yet again and it looks like Jake has learned a thing or two. Samantha makes him want things he never thought he'd want for himself. He's falling for her and Lennon. Can he melt her defenses and show her that all he needs is her, Lennon, and ice cream?

I swear, all this book was missing was a dog (because hello, life is so much better with dogs...or cats...or pets in general). Almost nothing I expected to happen happened and what did come to fruition--them falling in love and everything ending quite happily--did so in such an unexpected manner. While the romantic in me wasn't thrilled with Jake's behavior after the infamous first date to the zoo, the realist in me stood up and applauded because not everything can be smooth sailing or go according to plan when children are involved. Jake and Samantha take steps forward, but there are also steps back, no thanks to insecurities and fears. Again, I more than appreciated these because they felt real and honest and easier to relate to. We get the good and the bad with these two characters. Their relationship is tested from the start and not only did it make the story better but Jake and Samantha as well.

This is one of those books that makes it difficult for me to choose a singular thing I like best about it because everything about it was just so damn good. Aside from Jake and Samantha, there's a three-year-old scene (and heart) stealer in the form of a little miss named Lennon. Can I just say that I liked that she wasn't this child genius who sounded far older and wiser than her years? I've read too many books that have kids that came off as much more mature than the adults, and so I've learned to appreciate when kids are allowed to be kids. There are also supporting characters who provided additional levity as well as sense, namely Jake's set of closest friends and Samantha's mother and best friends. There is an ex, but again, the scenario involving him doesn't play out like I thought it would. Okay, stop reading this review already and just one-click Melt to see why it's a five-plus-star read. ♥