Review: King of Code by CD Reiss (Hackers and Coders #1) 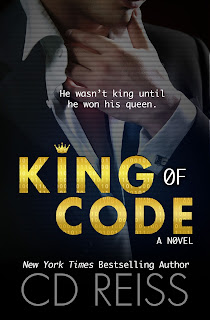 King of Code, which is the first in CD Reiss's new untitled series of standalones, is only my third read from the author--one being a sports romance standalone and the other being a Hollywood romance series starter--so maybe what I'm about to say is based on my limited reading experience as far as her work is concerned, but she's managed to surprise me three times over with how different each book is. This latest release of hers had me going through a range of emotions as I followed the story that had main characters Taylor Harden and Harper Watson so ensnared--or maybe it was more of Harper entangling Taylor, not only in trying to figure out endless lines of coding but discovering anything and everything there was about this woman the King of Code would desire in his queen.

Taylor Harden went from black hat to white hat hacker and he's reaped the rewards of that forced change in his life. Just as he's about to unveil a program that he believes and has touted as unhackable, the unthinkable happens--Taylor's program is hacked. The reigning king of computer programming has been publicly humiliated, but he isn't one to take it lying down. Unable to unlock his own code, Taylor goes hunting for the elusive but clearly wily hacker who has one-upped him. His search leads him to Barrington, nothing more than a speck of barrenness in the United States. What Taylor soon learns, however, is that his hacker isn't some nerd surrounded by computer monitors. No, Taylor's foe is far more formidable--she's a female named Harper Watson and she intends to make him pay handsomely for what he wants. He may have come for his code, but what if Taylor wants Harper instead?

If you've never read a CD Reiss book before, you're missing out. Her stories are enticing, with this newest one the latest piece of evidence proving my point. Taylor and Harper are on separate quests that were meant to intersect, and they're equally intrigued with one another. There's purpose in their words and actions and they're certainly more than just the label of "hacker" that's slapped on them. This isn't a simple romance, but then none of the CD Reiss books I've read so far are simple. There's a complexity there that I find irresistible, mainly because I have a thing for stories that make me think and feel, with the author not dumbing anything down or going with cheap thrills. There are points made by certain characters when it comes to the IT industry that may give you pause, and that in itself is what makes this a standout. If you're looking for more depth while still wanting everything else a romance novel has to offer, you can't go wrong with King of Code. And no, there is NO cliffhanger here. Five stars. ♥