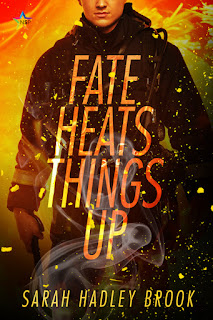 Fate Heats Things Up is Sarah Hadley Brook's latest short story and it's how Fate can either be one's happy helper or one huge hindrance. In the case of bartender Scott Dwyer, it feels more like the latter than the former, especially since it feels as if there hasn't been much of an opportunity for him to let Station 39's newest firefighter, Adrian Campbell, know he's interested in something beyond their limited interactions. With the rash of fires making people suspect an arsonist is in their midst--with some looking closely at the new firefighter in their midst--will Fate throw them a lifeline and show that some things are worth waiting for or will the arsonist get to them first?

Scott and Adrian certainly had a meet-cute that had both men taking notice of each other. It's also clear that they pay attention when the other's around, but life and responsibilities get in the way, more on Adrian's part than Scott's, but then being a firefighter doesn't really come with a preset schedule of activities. I did like that these two had a connection from the get-go, but as is the limitation when it comes to a lot of short stories, there were aspects of their relationship that could have been explored but weren't. That doesn't mean that it was a terrible read. I enjoyed Fate Heats Things Up; that's why I wanted more. For the less than fifty pages I got, it gets 3.5 stars. ♥