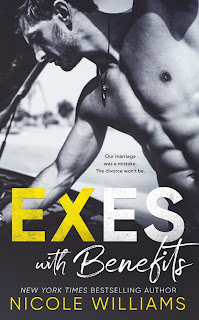 Note: This ARC was provided by the author via Ardent Prose in exchange for an honest review.

Exes with Benefits is a standalone love story that employs the second chance romance trope. Written by bestselling author Nicole Williams, we're introduced to an estranged couple who were once young and in love, choosing to marry even though they were barely into adulthood. Life held such promise for Canaan Ford and Maggie Ford née Church, but when loss came one time too many, Canaan chose to mourn in a way that Maggie simply grew tired of. When it becomes too much for her, she cuts her losses and leaves him behind. She goes on to create a life for herself, a life as far and different as the one she had in their small town. She's met someone else and has achieved success as an artist, but when her mother passes away, Maggie knows she must return her hometown--the same one where her ex-husband still lives. Except Canaan isn't really her ex, not as far as the law is concerned. They're still very much married, a situation that Maggie wants to rectify with a signature here and there from Canaan. However, he isn't quite ready to sign their marriage away, not when what he wants is a chance to fight for Maggie.

Once again, it's the hero that's won me over with this Nicole Williams release. Let me just put this out there: I wasn't a fan of the heroine here either. I get it, Maggie was young and couldn't handle things all that well and upped and ran (well, drove off) and basically flung a middle finger to her old life. However, can I just point out that Canaan wasn't exactly some middle-aged adult who knew any better. They were both young, which also makes me wonder where the adults were in this situation and why they weren't giving these two the guidance they so needed. Also, Maggie still being married WHILE she engaged in a new relationship with another guy took away even more points in her favor. There was just no excuse for it. It's not as if she couldn't have taken a day or two to demand a divorce from Canaan. It just smacked of being selfish and immature. Cheating is neither a hard nor soft limit for me, but when it's done by someone who goes out of her way to make herself look like some victim because her husband was in mourning just doesn't appeal to me. Sorry. So, Exes with Benefits receives three stars. ♥