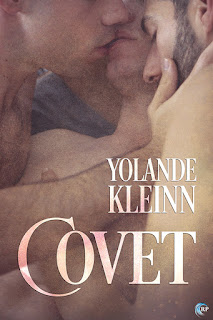 Covet is author Yolande Kleinn's latest standalone release and it's an M/M/M story about twin brothers who fall for the same man. Jack Mason works at the same university as Professor Colin Sloan. Jack has had his eye on Colin ever since they were briefly introduced. When Jack decides to pursue Colin, he makes it clear from the get-go that he's not looking for any sort of committed relationship. With Colin having just ended his own relationship three months prior, he quickly agrees with Jack's no-strings-attached arrangement. What neither man counts on is Jack's twin brother. You see, Peter Mason has his eye on Colin as well, and when Peter's long-term relationship with his girlfriend ends, he goes after Peter as well, thinking that Jack would be more than okay with. The thing is, Jack's feelings for Colin's have evolved into far more than he thought possible. Now Colin's caught between two brothers who just happen to be the very same two men he's fallen for. Can anything become of this three-sided quandary? Will Peter and Jack's relationship suffer? Will Colin have to choose between them or will the three learn to share?

I make no secret of my feelings when it comes to triad love stories. I'm not against them nor do I have an aversion to them. To me, they fall in the same category as stories that involve infidelity. There has to be that extra push, that thing to convince me that what I'm reading is real--that it is truly love and not just lust. With infidelity, the one doing the cheating can't be doing it simply because they're bored or are looking for some cheap thrill and hello, please don't justify it. With triads or threesomes, there's always this insistence that all feelings are equal on all sides. That everyone loves everyone else equally. However, more often than not, there's always that one pair that seems to be more in love than the two other possible pairs. In the case of Peter, Jack, and Colin, the twins do NOT fall for each other. There are no romantic feelings swirling between these brothers so if you were hoping for twincest, sorry to disappoint you. I certainly wasn't disappointed because I liked that the author didn't take the road everyone else may have probably taken. Peter loved Colin, Jack loved Colin, and Colin loved the Mason twins.

I enjoyed Kleinn's take on a triad relationship. This was different enough from majority of the threesome novels I've read that it felt fresh and creative. There's no denying that the feelings these men had for one another were real to them and that falling for the same man was such a monumental test on the close relationship between the brothers. Kleinn made it possible for me to become invested in what was happening to these three men, and I'm not just talking about the triad itself but also their individual relationships--Peter and Jack, Jack and Colin, and Peter and Colin. I would, however, like to mention one thing that niggled in my head from the moment I started reading the book--the cover. I rarely say anything about book covers in my reviews, but this one was just...weird. The two men who are about to kiss are obviously meant to depict the twins BUT the twins never engage in anything romantic or even sexual. Yes, they all have sex together, neither twin is exclusively intimate with each other. So yeah, that cover didn't win me over. The story and writing, though, did. I'm giving Covet four of five stars. ♥