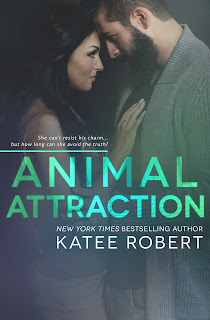 Animal Attraction is the adorable follow-up to bestselling author Katee Robert's Ties That Bind, both books making up her Hot in Hollywood series. Readers met thirty-five-year-old Levi Turnbull and thirty-one-year-old Brooklyn Jameson in the first book, and they were the voices of reason that their respective best friend needed them to be in order to get a happy ending. Well, they get their shot at a happily-ever-after in book two, and all it takes is one dognapped Tibetan Mastiff named Barbaras to get them together. Sort of. You see, Brooklyn is a private investigator who's rather excellent at her job, but that doesn't mean that money is rolling in. She's so desperate that she agrees to take on a jerk of a client whose very expensive Tibetan Mastiff has gone missing. The first clincher? The client knows who took Barbaras--his neighbor, who has a low opinion of. The second clincher? Said neighbor is none other than Levi Turnbull, highly wealthy and successful game developer. The third clincher? Levi is best friends with Brooklyn's best friend's boyfriend. Now, all Brooklyn needs is proof Levi took the dog. Easy. Right?

Ah, I loved Brooklyn's feisty nature in the first book as I did Levi's wiseass and wise commentary on his best friend's love life. There's also a glimpse of dognapping "victim" Barbaras--whose name I've confused with Barabbas and Barnabas, thanks to the Catholic in me--in the first book, but goodness, my heart went out to this dog when the reason behind his going missing is revealed. From the meet-cute (because these two never met in the first book) to their mutual attraction to Levi being passionate about why his neighbor didn't deserve a dog like Barbaras or any living creature--humans included, but that's just my opinion--in general were part and parcel of why this second in the series nudged the first book out as my favorite. Levi's love for 90s pop music called to me, and the fact that he had his vintage shirts that he wasn't embarrassed to wear in public earned him bonus points. Who doesn't love a man confident in himself? Brooklyn was as sassy as they come, and how she decided to resolve the impasse she was at made me want to give her a high-five. Animal Attraction was a joy to read, and I'm easily giving it 4.5 stars. ♥