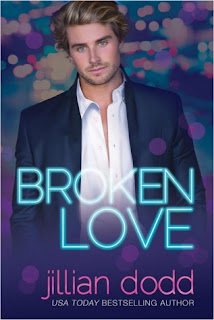 
Broken Love is the second book in the Love series from bestselling author Jillian Dodd and turns the spotlight on the eldest Crawford sibling, entertainment agent Cade, and the only woman who's ever owned his heart, actress Palmer Montlake. Six years ago, Palmer walked away from Cade, ending their secret relationship. In the process, however, Cade's friendship with Palmer's older brother, Pike, came to a violent close when Pike went after Cade, believing the worst about his best friend. Being in the same industry, Cade and Palmer's paths have spotted one another time and again, but it isn't until the wedding of Cade's youngest brother Cash to Ashlyn Roberts, an actress and one of Palmer's friends, that they're forced to be in the same space at the same time. They ended up with a love that was broken by secrets and misunderstanding six years ago. Fate keeps throwing Cade and Palmer together. Will this be their second chance at repairing trust and friendships? But how can you love someone that you hate at the same time?

We get a teeny, tiny idea about Cade and Palmer having a past in the first book, Vegas Love, and now we've got their full back story along with a second chance romance. Cade was best friends with Palmer's brother, but he's had feelings for Palmer since she was fifteen and he was twenty-one. Obviously, the age difference factored into his holding back, but it was also his friendship with Pike that had him hesitating to pursue anything with Palmer for as long as she was underage. Their friendship leads to a professional relationship when Palmer signs with Cade in an agent-artist agreement, but once she hits the age of twenty-one, Palmer goes after what she wants: Cade. That relationship was headed for a happily-ever-after before it imploded and all due to nothing more than a lack of communication between the two. This is a theme that seems to continue with these two. Imagine all that time and heartache they could have spared one another if only one of them cleared the air. Communication is key, even with fictional couples.

My favorite thing about this story was the fact that there wasn't this immediate jumping back into bed together for our main characters. They're sweet when they're together and it seems that the connection has never waned. However, it appears that these two didn't learn much during their time, so I was a tad frustrated, but more with Palmer than Cade. The poor guy may have tried too hard to maintain a balance six years between his friendship with Pike and his relationship as an agent and as a boyfriend to Palmer, but at least he wasn't making all this weird decisions with Palmer six years later. At one point in the story, just when you think everything is perfect, she does something so unexpected that I honestly wanted to fling my e-reader to the side. Again, all these people needed to do was communicate. That aside, I swooned at the love quotes and texting going on between Cade and Palmer. This was an overall fun read without too many surprises, and works pretty well for a weekend read. I'm giving Broken Love four stars. ♥