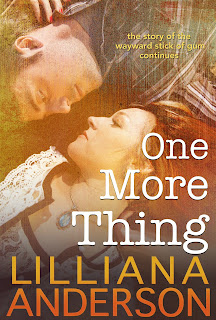 I wanted it to stop hurting.

I wanted to remember him.

I still wanted to miss him.

But I wanted it to stop hurting.

I'd been hurting for so long.

I went into this sequel with equal parts anticipation and trepidation. The former was brought about by my reaction to the first book in the series, 47 Things, where author Lillian Anderson introduced readers to Sarah Kennedy and Tyler Lohan and how Tyler was gone within months of their wedding and how Sarah was a widow at twenty-two. The latter came about because Tyler stuck with me and did I really want him to be replaced in Sarah's heart by someone else. He was the kind of first love that deserved to be--should have been--Sarah's forever love. But that's not how things worked out for them. A new man would come into Sarah's life--into her four-year-old son Ty's life. Would Jude Baker become her last love, the one who would be with her for the duration of her life? If tissues were necessary with the series starter, believe you me, you'll need them easily within reach for this heartrending sequel.

One More Thing finds twenty-seven-year-old single mother Sarah Kennedy Lohan creating a life for herself and her son Tyler Jr. Her support system remains firm and strong, with her parents and mother-in-law as well as her best friend there for her and Ty. But even after nearly five years since she lost her husband, the hole he left behind continues to gape. Sarah doesn't expect to fall in love again because no one could ever take Tyler's place. Then Fate shows up to mess with her once again. And yes, yet another stick of gum throws her world into a tailspin and leads an irate university lecturer named Jude Baker her way, only instead of a broken ankle, it's a fractured wrist (hers) and a fractured nose (his). The thirty-two-year-old bespectacled man is nothing like her late husband, but there's something about her that makes her feel happier and less lonely. But will letting Jude in mean letting go of Tyler?

Let me get this out of the way because they were minor hiccups that I noticed while reading this book. There's a point in the story where Jude, who's a Brit, tells Sarah that he's been in Australia for eighteen years and that he and his siblings were brought over by his stepmother when he was seventeen, meaning he is currently thirty-five. However, when he meets Sarah's family, he tells them that he's been in Australia for fifteen years, making him thirty-two. Then there was the whole use of the word "widower", which is a masculine gender marker, a couple of times. This later switches over to the feminine term "widow". Some of you will probably think I'm being petty and what I had in my hands was indeed an advanced reader copy, but noticing these things is part of my regular job, so I can't necessarily pretend that I don't see them. But yeah, I just wanted to point those out. So back on track we go.

This sequel is not necessarily about moving on but about moving forward, and when I say that, I don't mean that Sarah had to leave Tyler's memory behind. That's something that she carries with her all throughout, and thank God that's the route that Lillian Anderson chose to go with. I don't think I would have been able to take it if she had decided to let this story play out a different way. This also reminds us that it wasn't just Sarah who lost Tyler, and everyone mourned in their own way. I adored Tyler in the first book, and his journal entries here made him a comforting presence of sorts. That did, however, make it a tad difficult to fully love Jude. Did I like him? Yes, I did, but not to the same extent I did Tyler, though his words to Tyler--alongside those of everyone else's--made me cry and I appreciated him more. Overall, One More Thing gave Sarah the ending she deserved. This gets five-plus stars. ♥

Sarah is my forever. For her, I'm but a moment.