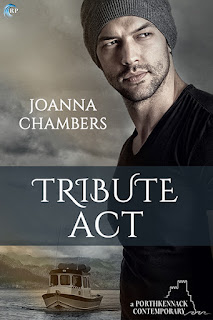 I loved, loved, LOVED Joanna Chambers's first contribution to the multi-authored Porthkennack series which was entitled A Gathering Storm, the first historical story in the collection. Now, she's adding a contemporary tale and it's the eighth and latest Porthkennack addition. Tribute Act is the story of thirty-two-year-old Jonathan Bridges, a man who leaves behind the life he had created for himself in London in order to return to his Cornwall hometown of Porthkennack to help pull back the business, Dilly's, his mother and stepfather have from the brink of failure. Surprisingly, Nathan's hometown feels like home once again, and the only things he can really complain about are his lack of a committed relationship and the weight he's gained and fitness regimen he once had. He and his parents worry most about is his fifteen-year-old sister Rosie who desperately needs a lifesaving kidney transplant.

When the stepbrother he's never met--thirty-one-year-old Dylan MacKenzie--arrives and tells them he's willing to donate his kidney, Nathan is gobsmacked. Not only had he completely forgotten about his stepbrother's estranged son, but as fate would have it, Dylan is Mack--the man Nathan shared an unforgettable hook-up with before Mack up and disappeared on him. As Mack recuperates from surgery in Nathan's home, the two stepbrothers and one-time lovers try to remain true to their decision to not to bring up that one night they shared. However, not bringing it up doesn't mean Nathan hasn't thought about it. It also doesn't mean that Nathan is unable to stop himself from looking at Mack wishing they could become more than two people tied together by circumstance and close quarters. Even if they were to take a shot again, can Nathan deal with Mack leaving Porthkennack is a few weeks?

Although Nathan and Mack do have a one-night stand very early on in the book, everything that follows is what I'd consider a slow burn romance. Aside from laying a stronger foundation for themselves, there are also their respective issues when it comes to Mack's father, aka Nathan's stepfather. Mack hasn't seen nor spoken to Dex MacKenzie in over a decade and a half's time, and as much as Nathan wants to take Dilly's forward, Dex's hesitation becomes frustrating. As much a this was about the romance between Nathan and Mack, their story is interwoven with that of the family they both share, and the awkward reunion was just a hint of how difficult the path was to forgiveness. I'm a sucker for stories like this one, and I loved that Chambers decided to have her main characters take their time before that very apt and heartwarming ending. Tribute Act receives five out of five stars. ♥