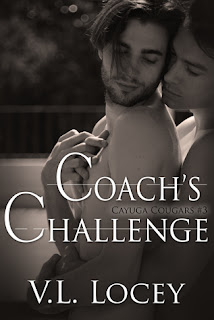 Confession time: I wasn't a fan of Victor Kalinski's when I first read his and Daniel Arou's love story in V.L. Locey's Point Shot trilogy. The guy was...well...for lack of a better term, an asshat. The guy thought he was God's gift to men, women, AND hockey. My main hesitation about even starting the Cayuga Cougars spin-off was that he was going to be around, and I was thrilled that there were only glimpses of him in the first two books. He and Dan, however, are back in the spotlight with the third book, and while I've liked Dan from the get-go, I wasn't all too sure as to how my personal dislike for Vic was going to affect my reading experience. Shockingly, I didn't hate him here. Even more mind-boggling is the fact that I feel like I now have a better understanding of Victor Kalinski-Arou.

Coach's Challenge finds the husband-and-husband team of Victor Kalinski-Arou and Daniel Arou-Kalinski facing transition within the Cayuga Cougars when the top veteran, Mario McGarrity, decides to announce that he'll be retiring at the end of the season and when management bring in their latest prize acquisition--Sander March. As the special teams coach, Vic's all for Sander coming in, but then Dan drops a bombshell on him: Sander was an ex of his, but not just any ordinary ex. You see, Sander and Dan were together for most of their college years and then became engaged. As if that wasn't enough to throw Vic for a loop, someone from his own past suddenly and unexpectedly comes knocking on his door more than once. How will Vic and Dan step up to these two challenges?

My feelings regarding Vic have done a 180. Well, okay, maybe not a complete 180 since the man still has a tendency of grating on one's nerves. But goodness how he's evolved! Yes, it took him a while to get there, but get there he did, and Dan deserves a hell of a lot of kudos because he stayed strong and supportive, and he was the voice of reason when need be. I also adored Vic's therapist, Dr. Lotnick, who's got the patience of a saint and isn't suckered into punching the guy no matter how tempting the idea may be. From start to finish, this book was entertaining as much as it was endearing. Yep, color me surprised, but my hats off to V.L. Locey because she had me to not just change my mind, but open my heart to a character I wholly disliked. Five stars for Coach's Challenge. ♥