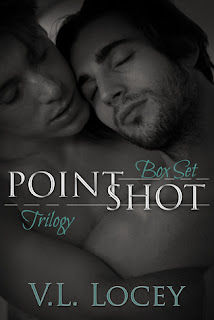 Point Shot is a series composed of three books, Two Man Advantage, Game Misconduct, and Full Strength, and it chronicles the story of professional hockey player Victor Kalinski and how he goes from the majors to the minors but finds love along the way. Vic is a man who doesn't appreciate being called gay when he's actually bisexual. He's also a misogynist, thinks it's perfectly forgivable if he cheats on his boyfriend with a woman because it doesn't count, makes tactless and crass jokes, and believes calling his boyfriend a variety of insulting nicknames due to his short stature is okay. So, does Vic, also known as the Venomous Pole, have any redeeming qualities? Is there any hope for him to change his jackass ways? In some ways, yes, but the Vic you get in the beginning is still the same Vic you have with you at the end of the day, albeit a slightly more mellowed out, less antagonistic Venomous Pole.

Vic Kalinski is a talented hockey player but his attitude and propensity for getting on the nerves of his teammates has reached its tipping point, leading his team to send him to the minors. He isn't happy about the move from Boston, Massachusetts to Cayuga, New York, and he makes that displeasure known to his new team. The alternate captain though, isn't taking the bait, and soon enough, Daniel Arou is proving to be one hell of a distraction. A hook-up leads to something more, but when Dan is called up to Boston, Vic goes looking for a warm female body to keep him company for the night...one that later ends up pregnant and Dan isn't exactly thrilled when he finds out. With his happy personal life begins to slip from his fingers and professional one continuing to unravel before him, will Vic be able to man up and take responsibility for the choices that he's made before it's too late for him?

Overall, the trilogy was an okay read. It wasn't overly long--a total of 302 pages, but just under that if you remove the cover and other extra stuff (i.e. table of contents, etc.). I admit it: I didn't like Vic, and even when he did mature and take responsibility for his life, there were still the same things about his personality that bothered me. I mean, calling someone names because of something you consider a deficiency isn't cute. It's like calling an overweight person every synonym for "fat" and then mentioning fictional characters known for being obese. And I'm sorry, but the whole thing about Vic being with a woman meant nothing precisely because she wasn't a man and that all she was was a "warm hole"? Yeah, stuff like that wasn't going to make me a fan of his anytime soon. The problem is, Vic is THE main character in this trilogy, so not liking him was definitely going to affect my overall view and feelings.

The writing was, again, okay. I do find it a bit weird, though, that Vic and Dan were in their twenties, yet Vic was thinking of and spouting stuff from decades ago, i.e. Chuck Connors from Standing Tall (which was written as "Standing tall", instead of in italics), Elvis Presley's lips, Aunt Bee and Barney from The Andy Griffith Show (which wasn't mentioned so readers who've never heard of it will wonder who the heck these people are and in what context they were mentioned), etc. I'm in my early forties and enjoy older movies and television shows as much as I do more recent ones, but Vic didn't really come off as someone who was twenty-five. I'd have thought he, and possibly even Dan, was in his thirties. This could have also done with some editing because there was quite a few unnecessary fillers thrown in. Overall, the Point Shot Trilogy Box Set was okay, but missed out by a few. Three stars. ♥