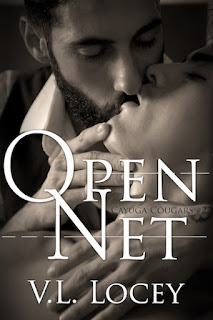 Open Net, the second book in the Cayuga Cougars series, isn't my first V.L. Locey read (it's the seventh), but it is the first that I've quite liked. This isn't the first M/M romance that's tackled an HIV-positive story line, but it's the first one I've encountered in the sports romance sub-genre, and in my opinion, it's the author's best work to date. This is the story of twenty-two-year-old Cayuga Cougars goalie August Miles and thirty-eight-year-old transport orderly Salvatore Castaneda. Augie is still very much in the closet while Sal has been out since he turned twenty-one, a birthday that would prove to be life-changing in more ways than one--he contracts the human immunodeficiency virus or HIV. If the sixteen-year age difference doesn't scare Augie away, Sal's being seropositive should, or at least that's what Augie's best friend tells him. Will Augie listen to his head--and friends--or his heart?

This May-December love story is made further complicated with one of the main characters having HIV, but I think that Locey did a fine job making sure not to add more drama than necessary with as far as those two story lines are concerned. Surprisingly, the drama doesn't even come from the two main characters, but from peripheral character Mario McGarrity, who I ended up not liking all that much in this book even though I liked him enough in the series starter. I mean, I get the concern, especially with him taking Augie under his wing and treating him like more of a son than a friend, but there is such a thing as becoming overly involved in the lives of someone else, and well, that's what Mario did. Thankfully, Mario did redeem himself, and I need to give the author kudos on striking what I felt was just the right note when tackling such a sensitive issue like seropositivity. 4.5 stars go to Open Net. ♥