Review: The Thing About Love by Kim Karr 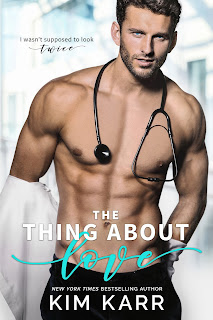 The Thing About Love is the first in a new collection of standalones from bestselling author Kim Karr, and it's a romantic comedy with a hint of angst. When Juliette Easton's uncle handed her the reins of Easton Designs & Weddings, she knew not to take his trust in her for granted. She's been able to make the business a success in Georgia, but lately, it's been floundering a bit, and Jules knows all too well how important it is for her to land the wedding between the son of the governor, Kyle Remington, and the granddaughter of media mogul and Georgia royalty, Rory Kissinger. If things go her way, this could be the wedding that will open more profitable doors for her.

But then Jules mistakes the man flirting with her for the groom-to-be and smacks him in the face with cake, and things don't look all that great for Jules--not when the man turns out to be none other than Dr. Jake Kissinger, the bride's brother whose very approval Rory is looking for. The whole cake fiasco has Jake thinking that Jules isn't the right bridal coordinator for his sister's upcoming nuptials, but when their beloved grandmother's health takes a turn for the worse and her one request is to be there for the wedding, Jake and Jules will have to learn to play nice, leading the former foes to became friends...very flirty friends. It's just a friendly fling, so why does it feel like more?

I discovered Kim Karr's writing in June of 2016, and since then, I've enjoyed her lighthearted romances, although I still need to check out her heavier fare, as highly recommended by a friend of mine who happens to be a fellow blogger as well. Her latest release was a fun read, one that had two people who started off on the wrong foot but ended up being totally right for each other. Well, okay, things between Jules and Jake were actually pretty good in the beginning, but then she had to go and spoil it all by smooshing cake in his face. The romance between the two was mostly light, only venturing into more angsty territory when it came talk about family legacy and their pasts.

Aside from Jake and Jules's love story, I also liked the respective family dynamic going on, given that Jake is really close to his grandmother and his sister as is Jules with her uncle and her cousin. Speaking of Jules's cousin, MMA fighter Finn Easton, the guy proved to be quite a great supporting character, especially with how much he was willing to do to help out Jules and the bridal coordinating business. Then there was Jules's ex-fiancé, photographer Jaxson Cassidy, who was thankfully a good guy who remained good friends with Jules. I look forward to reading both Finn's and Jaxson's stories, especially if they're as good as Jules and Jake's in The Thing About Love. 4.5 stars. ♥

Purchase The Thing About Love on Amazon.