Book Spotlight: Twice in a Lifetime by Jodie Griffin 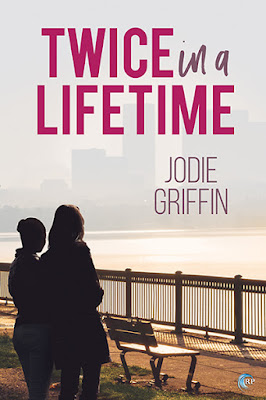 About Twice in a Lifetime
When widow Talia Wasserman applies for a job with the local police department, she’s shocked to discover she’ll be working for Lieutenant Eve Poe, an officer she’d met—and been attracted to—during a long-ago citizen’s police academy workshop. Fifteen years later, the spark is still there, and no one’s currently in Talia’s life or in her bed. But there’s just one teeny, tiny problem. Eve is her boss, so she’s completely off-limits.

Eve feels a sizzling connection with Talia from the very first, but Talia works for her, and that’s just a bad idea. Besides, Eve needs to focus on the person sending disturbing emails to her office, and not on the woman who quickly makes herself invaluable to the department. It’s too bad her heart doesn’t agree with her.

Then Eve is badly injured in the line of duty, and Talia’s worst fears are realized. She may lose her chance at happiness with the woman she’s come to love, and she can’t survive that kind of loss twice in a lifetime.

Add Twice in a Lifetime on Goodreads.

About Jodie Griffin
Jodie Griffin didn’t always want to be a writer. She spent hours reading, but school papers were written one painful word at a time. Then a story idea came, demanding to be put on paper. After years of practice, she took the leap, submitted her first manuscript, and hasn’t looked back.

Jodie is also an avid photographer, a chocoholic, and a lover of bad puns. When she’s not writing, she’s likely out stalking the moon for that perfect shot.

Jodie’s own happily ever after includes one incredibly supportive husband and one future heroine.

Giveaway
To celebrate the release of Twice In a Lifetime, one lucky winner will receive a $25 Riptide credit! Leave a comment with your contact info to enter the contest. Entries close at midnight, Eastern time, on January 27, 2018. Contest is NOT restricted to U.S. entries. Thanks for following the tour, and don’t forget to leave your contact info!