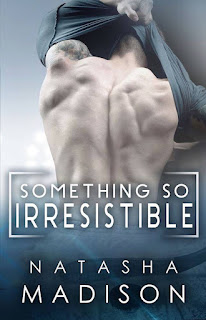 Something So Irresistible is the third and latest release in Natasha Madison's hockey romance series entitled Something So, and it's the best one of the lot (so far). If you've read book two, Something So Perfect, you'll recall that the second epilogue takes place nearly seven years after the events in Matthew and Karrie Grant's love story. Book three is all about twenty-three-year-old Allison Grant, younger sister of Matthew Grant, eldest daughter of Parker Stone, and stepdaughter to Cooper Stone, who is the newest member of the public relations department for the very same hockey team her brother belongs to. Thirty-something Max Horton has a less than stellar past, whether it be during his childhood or his most recent years with his team, in particular with one teammate--Matthew Grant. When Allison become the new PR person for the team, he knows to not expect any favors from her. As much as he keeps his distance from her, however, Max can't quite deny just how drawn he is to her. She may be more than a decade younger and is the one woman he should stay away from, but how long can he resist?

This is, by far, my favorite book in the series. With a lot of tension--sexual and otherwise--between Allison and Max, this may have followed in the enemies-to-lovers footsteps of the first two books, but only in terms of trope and general subject matter. Allison and Max's story managed to distance itself from the whole alpha athlete thing. Well, okay, Max was still an alpha athlete, but he wasn't overbearing nor did he keep pushing until he got his way, as was the case, more often than not, with Cooper and Matthew. While she may be in her early twenties, this was where Allison truly came of age, becoming her own person, away from the shadow of her stepfather and brother (though I'm not a fan of her declaration that she loved Max more than her family...why couldn't it have been equal yet different?). I loved how this story played out, and this book showcases that the author has learned from mistakes made in her previous releases in the series. I'm not entirely sure if there's a book four in the offing, but if there is one, I'll gladly read it. This does have an occasional error or two, so Something So Irresistible gets 4.5 stars. ♥

Read my reviews for the Something So series:

Something So Right (book one) - three stars - My Review

Something So Perfect (book two) - four stars - My Review

Purchase Something So Irresistible on Amazon | B&N | iBooks | Kobo.