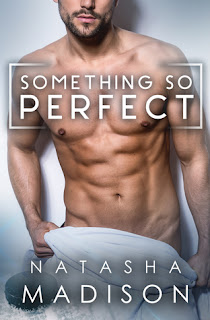 Something So Perfect is the second novel in the Something So series from Natasha Madison. If you're familiar with the series starter, Something So Right, then you'll recognize Matthew Grant, eldest child of Parker Stone née Moore and stepson of hockey legend Cooper Stone. His story takes place several years after he was picked up in the NHL draft. He was the promising rookie who knew his way on the ice while armed with a hockey stick and skates. Off the ice, however, Matthew floundered, and he paid for his partying ways, being demoted to the minors and then returning home without any team in the league willing to take a chance on him. At twenty-five, however, he gets a one-year contract to play in New York, but it comes with a caveat: he needs a chaperone. The person chosen to keep an eye on him is none other than Karrie Cooney, daughter of the team owner who ends up becoming Cooper's personal publicist and glorified babysitter. The attraction between them is obvious, but while Cooper is willing to cross the line, Karrie is hesitant to become entangled with the hot but imperfect hockey player.

My worst fears were abated with this second in a series. My main concern was that editing errors or a general lack of editing was going to befall this book, and while it did have quite a few errors between the covers, the number was a far more tolerable one compared to its predecessor. The first few chapters also had me worried that it was going to read too much like Parker and Cooper's story, but thankfully, this one had enough about it to allow it to stand out from book one. Matthew is just like his stepdad--very alpha and very used to getting his way, but he's challenged by Karrie, who doesn't appreciate being bossed around and finds his over-protectiveness a wee bit stifling. I enjoyed the back and forth between the two, which I think is a staple in this series, as is the theme of enemies-to-lovers. The epilogue to this one does serve as a precursor to the third novel in the series, and it looks to be a good one, given the history that the main characters there have with Matthew, especially the hero. Things are looking up for the Something So series, and though far from perfect, Something So Perfect still gets four stars. ♥

Purchase Something So Perfect on Amazon | B&N | iBooks | Kobo.