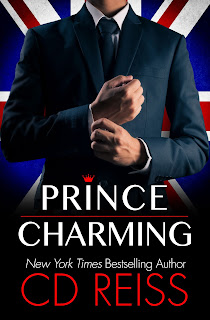 CD Reiss takes us back to the unofficial royalty of Silicon Valley by way of her newest book in her series of stories about a core group of coders and hackers who have made reputations for themselves. Prince Charming gives us an American federal agent who has her sights set on a British hacker rumored to have a substantial and remarkable black hat history trying to transition into the white hat world of information technology. Agent Cassandra Grinstead knows that Keaton Bridge is Alpha Wolf and that he's tied to Keyser Kaos, even she has yet to be able to prove it. Her boss suspects that Keaton is drawn to Cassie and doesn't hesitate to have Cassie use that attraction. The thing is, the attraction is very much mutual, and if Cassie allows herself to fall for Keaton, it'll be like Alice down the rabbit hole for her. How long can she resist trying to figure out the man who's laying claim over her heart and mind, body and soul? But the more she learns about him, the more Cassie realizes that Keaton is hiding far more than she could ever have anticipated. Both know it may be best to run...but is it away or towards each other?

King of Code set the bar high for this collection of loosely connected yet very much standalone novels, and while Prince Roman didn't reach the same heights that its predecessor did, Prince Charming more than sufficed. I loved that Keaton and Cassie were distinct from the first two couples, allowing them to develop and build on that chemistry that was bubbling beneath the surface even with a two-way mirror between them at the very beginning of the book. I'm not going to give the rest of the story away, especially since I do consider this a book with romantic suspense elements to it, and if you're like me, you're going to be sitting there reading and coming with scenarios and theories about what the heck may be going on, and then itching to find out if you're right or wrong. What I will say is that this doesn't have the barrage of technical jargon that the first book did--although it still has that coder slash hacker romance feel to it--so I don't think you'll feel like you're lost with this one. CD Reiss doesn't disappoint with Prince Charming, which I'm giving five stars to, and now she's got me curious about White Knight. ♥

Read my reviews for the Hackers and Coders series:

King of Code (book one) - five stars - My Review