Review: Most Likely to Score by Lauren Blakely (Sports Romance #2) 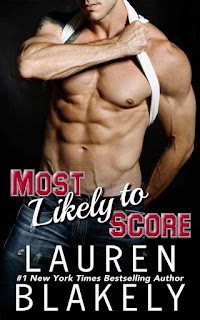 The puppy named Lulu is licking his face now.

Jones cracks up, belly laughs radiating through him as the white, black, and brown six-month-old puppy with crystal blue eyes bestows a popsicle-worthy kiss across his lips.

That dog has all my good fortune.

By the time I had finished reading Most Likely to Score, the second in bestselling author Lauren Blakely's series of interconnected but standalone sports romances, on the very first day of the new year, I knew it was going to end up on my list of top reads for 2018 by the time we get to December 31st. Yes, it's THAT good. Over the past two years that I've familiarized myself with Blakely's writing in the realm of romantic comedy--with a romantic suspense duet thrown into the mix--I know all too well that this author's brand of rom-com is in a class all its own. This fact is reiterated by way of her latest release, and this third (well, at least the third that I've read of hers) sports romance novel is scrumptious and it sizzles with each and every chapter and encounter between its covers.

Jillian Moore loves her job as the publicist for the San Francisco Renegades, but while getting a glimpse of just how hot the football players are may be considered a bonus by some, Jillian refuses to cross that line. She's friendly but professional, especially when it comes to Jones Beckett, the team's wide receiver, the second most popular player behind the quarterback, and considered the best in his position in the league. They share an easygoing working relationship, one that's sprinkled with a bit of flirting here and there. All innocent, of course. Or maybe not so much. After all, Jones has played a starring role in Jillian's fantasies ever since they first met. But there's no way Jillian would jeopardize a likely promotion by making all those fantasies reality. It's not like he's interested. Right?

Jones Beckett may be good at what he does on the field, but his image has taken a beating over the years. The fact that his former agent was stealing money from him was the bitter icing on the cake. With a new agent and one of his brothers overseeing all his transactions, Jones is prepared to do whatever it takes to make people see that he's only a player when he's got his uniform on, not when he's off the field. Working on a charity calendar with the team's publicist should be a step in the right direction, but Jillian Moore is a temptation that Jones has found increasingly difficult to resist. Crossing the line once is one thing; doing it again could be career suicide for both of them. But maybe they could be together... It won't take a Hail Mary play; all it'll take is a bit of faith in one another.

This book scored and it scored big with me. I loved the story of two people who know one another actually getting to know each other's personal history, thereby building a true blue friendship between them. In the process, these two fell in love, even though doing so may have been deemed disastrous by some. These two were so frickin' hot AND adorable. The inclusion of Jillian's heritage was something I wholly appreciated, especially since a lot of things were familiar thanks to influence of Chinese culture in my own country--though I am not nor will I ever be a fan of pomelo. Just...no. Anyway, the family dynamics within their respective clans plus that of how they interacted with the other members of the Renegades team, whether player or otherwise, also had me loving this book even more.

It would be easy to jot down every single thing about this novel that, when looked at, would make you understand why it's already a favorite of mine. But see, it's not just those separate elements that matter; it's when you put them all together, and you look at the novel as a whole that makes this extraordinary. Blakely's gift for writing with both aplomb and creativity shows in her stories, and her characters are the kind that you wish you either knew personally or could live vicariously through. This new sports romance of hers doesn't pander, and you get enough of the sports to make you realize that she's done her due diligence. There are a few more players on the Renegades team that I hope will be written about; for now, you'd best peruse Most Likely to Score. Five-plus stars. ♥

Read my reviews for the Sports Romance series:

Most Valuable Playboy (book one) - five-plus stars - My Review

Purchase Most Likely to Score on Amazon | B&N | iBooks | Kobo.