Review: One to Keep by Lexi Blake writing as Sophie Oak (Nights in Bliss #3) 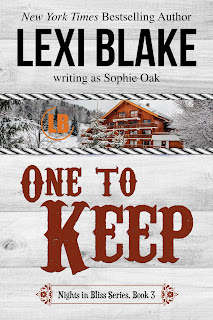 Note: An advanced reader copy was provided by the author via InkSlinger PR.

Lexi Blake takes us back to the town of Bliss, Colorado with the third novel in her re-released Nights in Bliss series. This time around, we don't have the usual three-sided relationship but a second chance story involving fellow artists twenty-three-year-old Jennifer Waters and thirty-two-year-old Stefan Talbot. For a year and a half, Jen made it her life's mission to push Stef into seeing her as more than someone who was nine years younger than him. She thought their night together would be the tipping point into a committed relationship; instead it led Stef to emotionally stepping back from her, which in turn led to Jen packing her bags and moving away. When she's arrested for a theft she didn't commit, she's surprised by Stef rescuing her from more jail time. But maybe she isn't really all that surprised. Jen knows that Stef has feelings for her but something's holding him back from the idea that they, indeed, have a future together. However, Stef isn't merely being stubborn about his situation with Jen. There are deeply rooted reasons why he keeps his distance. What would it take to convince Stef Jen was for keeps?

Stefan Talbot was an enigma in the other books, but I'm so glad that there was so much more to him. He was the uber rich artist with a golden heart who played matchmaker and benefactor to many a citizen of Bliss. I wouldn't even say that it was Jen who thawed his persona because it was clear that he had close relationship with a lot of people in town. If anything, it was fascinating that it was with Jen that he had to keep a tighter rein on his emotions, unwilling to risk his heart on someone he believed would leave him due to her age and general inexperience when it came to life in general. These two had crazy chemistry together, and even when Stef at his frustrating worst, his need to take care of Jen was utterly endearing. Then there was the suspense part of the story, which introduces a very interesting new character who I'm looking forward to reading more about as the series moves forward. Readers also get to check on the throuples that have been featured and get snippets on characters from Blake's Texas Sirens books. All in all, One to Keep turned out to be my favorite in the series (so far). 4.5 stars. ♥