Review: With Every Breath by Lia Riley (Wanderlust #1) 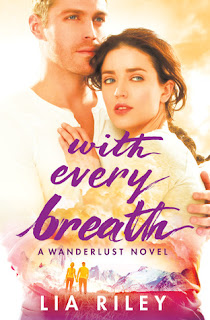 Twenty-one-year-old Auden Woods has lived her life playing it safe, constantly reminded by her twin sister how lackluster of a human being she is. When she's given the opportunity to move from an internship to a more secure position with Outsider magazine, she decides to take a chance and heads to Patagonia to do her fair share of mountain climbing while trying to find climbers she can interview for a feature article. When she's caught in the middle of a storm, she finds shelter with brooding Scotsman Rhys MacAskill, who just happens to be one of the most highly skilled, and very controversial, climbers around.

While Auden is hoping to find herself with La Aguja as the backdrop, Rhys is seeking solace even as an unbearable weight of guilt has settled upon him. He's determined to climb the legendary mountain solo, a risk that many think is suicidal, but one that Rhys feels he needs to do--both for himself and for his brother Cameron. Meeting Auden presents an unplanned distraction, and learning that she's a journalist should have him wanting to get as far away as possible. But what's swirling between them isn't mere attraction, and if they gave it a chance, they may find exactly what they were looking for...and much more.

With Every Breath is the first book in author Lia Riley's newest new adult (NA) romance series, Wanderlust. This book came as a surprise, and not only because it was very different from the first and only series I ever read from the author, which was Brightwater. A part of me was expecting a lot of technical jargon and descriptive showcasing of both the gorgeous backdrop that is Patagonia and the exhilarating endeavor that is mountain climbing. While there is a bit of that, a lot of the interaction between Auden Woods and Rhys MacAskill happens in close quarters, meaning that it's mostly limited within the bubble that's formed around them and, surprisingly, I wouldn't really say that it was a negative, because then it allowed the focus to be solely on the two, without anything else taking away the attention.

Auden uses the trip to hopefully discover a part of herself that she hopes exists and will flourish further. This is her opportunity to take chances and to fully participate in a new adventure and not just be a mere observer. When she meets Rhys, it becomes clear pretty quickly that the twenty-five-year-old climber is dealing with something heavy. They're both trying to deal with their respective relationships with their siblings, and while Auden's twin sister deserves to be told off more often, it's Rhys's story with his brother that's quite heartbreaking. There were a couple of twists concerning Rhys and Cameron that I didn't see coming, and I actually got teary-eyed at one point. Rhys is tormented by guilt and it's not even absolution that he's looking for. I admit that he's the biggest reason that I really enjoyed and liked this series starter.

The story has drama and angst, but it also has lighthearted moments, courtesy mostly of Auden and her inner musings that end up getting blurted out in the most awkward of situations. Considering they were only together for several days, a lot transpired between Auden and Rhys, and I'm not just talking about the having sex and falling in love parts. The biggest part of their connection is emotional, and they're able to help one another open themselves to the possibilities that neither one believed existed for them. December has been proving to be a month filled with a heck of a lot of really good reads and this series starter is certainly on that list. I'm not sure what or who will comprise the rest of the Wanderlust series but it's one that I'll be keeping my eye on in 2016. With Every Breath is a 4.5-starred and worthwhile read. ♥

Pre-order With Every Breath on Amazon | B&N | Kobo.