Review: Lost Without You by Jodi Vaughn (Cloverton #1) 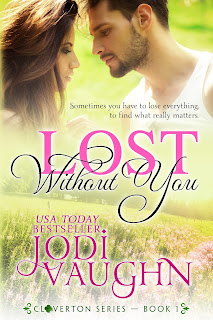 At the hands of her abusive fiancé, Grace Witherspoon found herself being forced to give up almost everything that mattered to her. To gain her freedom, she was left with no other choice but to give up one last thing: her life. Faking her death and with help from her late father, Grace has no exact destination, but a house for sale in Cloverton, Tennessee calls to her, and she soon finds herself as the small town's latest resident. She tries not to draw attention to herself, but when a wayward driver ends up accidentally hitting her as she crosses a street, Grace has no choice but to open the door to the friendship offered by the young woman. What she doesn't expect, however, is to be attracted to the driver's older brother, Sloan Jackson.

Grace knows what it's like to fall for a man's good looks and sweet words and have turn out to be a monster, but Sloan Jackson has already gotten his heart broken after catching his fiancé in bed with his co-worker, making him wary of women in general and liars in particular. He may be drawn to Grace Witherspoon, but he's resistant to his sister playing matchmaker. But as much as he tries to stay away and as often as Grace dismisses him when he's around, Sloan is finding it difficult to keep his distance. He can tell she's been hurt before and he wants nothing more than to show her that he will stand by her side. Will these two find what's been missing in their lives in each other or will Grace's secret break them in the end?

Lost Without You is the first novel in the Cloverton contemporary romance series from bestselling author Jodi Vaughn and is set in the fictional town of the same name in the state of Tennessee. This series starter has a woman introduced to readers as Grace Witherspoon on the run from her abusive ex-fiancé, and leaves her life behind in New York by faking her own death. As much as Grace wants to live a solitary life--partly because she doesn't want to call attention to herself and risk someone trying to find out who she is, and partly because she wants to be self-sufficient and not lean on anyone for help--she quickly learns that life in a small town has people naturally curious about the newcomer and offering all kinds of assistance.

There's an instant spark between Grace and Cloverton police officer Sloan Jackson, and while both try to deny it for a good while, they give in to what they're feeling. I liked that the progression of their attraction and the resulting relationship wasn't rushed, allowing it to feel more real and not something that's based solely on lust. They've both got issues with trusting the opposite sex, so the fact that they hesitated time and again made absolute sense. Then there's the story line regarding Grace's ex-fiancé, which went in a direction I wasn't expecting, and I liked how it wasn't the main focus of the book, though the resolution to the whole thing did feel somewhat anti-climactic when we finally got to it. But overall, I was pretty content.

It's easy to like Grace and Sloan, both as individuals and as a couple. Grace doesn't play the victim, showing what she actually is: a survivor. This plays in quite nicely with the side story concerning her student and her student's boyfriend and I appreciated how that connected with everything that followed. Of course, Sloan was the nearly ideal guy, but his flaws merely make him more human and easier to relate to, which are all good things. There were also supporting characters that stood out, specifically Allison Jackson, Tabitha Miller, and Mitch Woods, so I look forward to them getting their own stories in the future. While the ending did feel slightly abrupt, Lost Without You was a good four-starred series starter. ♥

Purchase Lost Without You on Amazon.