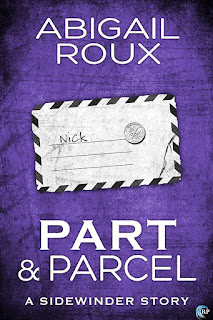 “Nick,” Kelly whispered, and he tried to scoot even closer. Nick’s hand tightened on his hip, keeping him at bay. Kelly cleared his throat, thrown by the inability to touch Nick whenever he wanted. “You gave so much of yourself to all of us. So much. You were everything we needed. You . . . you were my beacon. When I was drifting and thought I’d drift all my life, you gave me a home. You were Ty’s rock, you kept him grounded and sane and good when he could have gone tailspinning off into Bond villain territory. You were Eli’s brother, you were Owen’s sounding board, and hell, I’m sure you provided Digger with matches and then put the fire out for him after.”

Nick snorted and closed his eyes.

Kelly was shocked to realize he was almost in tears. “You gave so much of yourself to each of us, and we never even realized it. And you never asked for anything in return. Did you?”

After nearly losing his life helping out his best friend down in Florida, Nick O'Flaherty is still recovering from the injuries he sustained and Kelly Abbott has been by his side through it all. However, Kelly's been treating Nick more like his patient than his boyfriend, and with all the lies and deception added on to a mission almost gone wrong, a gap has formed between the two of them, one that threatens to grow wider with every unspoken worry and fear that niggles each one, but avoidance seems to have become a staple for their relationship. They love each other, but with all that's happened, questions and doubts still linger.


Coming so close to death had Nick seeing Eli Sanchez, the one  Sidewinder team member that is no longer with them, and having Eli's voice in his head when he thought everything had reached an end he could never turn back from has him finally delving into the contents of the box left to him by his dear friend. What he finds is one letter that leads to a stack of other letters to be read in order and only after the Sidewinder team reunite. What follows is a journey--one final mission--that could stir up memories, both good and bad, but ultimately, it may lead to absolution and reinforce the brotherhood that is Sidewinder.

When Abigail Roux ended the Cut & Run series a few months ago with Crash & Burn, I had a myriad of emotions stirring within me. It's difficult to say goodbye to a series that you've fallen in love with, but I knew that I would still see Ty Grady and Zane Garrett occasionally in the Sidewinder spin-off series. But now, after having read Part & Parcel, the third novel in the series, I can't help but wonder if this is the end of yet another series that I love because it sure as heck felt like it. This was so much more different than the first two books, but that brand of humor that I've come to associate with the Cut & Run universe is as present as ever. This wasn't just Nick O'Flaherty and Kelly Abbott's story, but it was truly one about Sidewinder and as a fan of both series, I was thrilled to have learned more about the group as a whole as well as the three other members--Eli Sanchez, Digger Garrigou, and Owen Johns--who may not be in the spotlight as much as Ty, Nick, and Kelly, but never fail to make their presence felt. There wasn't a great deal of action and suspense, but I totally got why those elements weren't as prevalent in this book and appreciated how the focus was about the friendship and brotherhood these six men and Marines shared.

Nick and Kelly have fought by each other's side, but fighting with one another tends to bring out the worst in the two. While they may not be lacking too much in terms of intimate, physical communication, they do suffer from a lack of verbal communication, failing to express whatever's going on in their heads and hearts until things have gotten out of hand. It wouldn't be fair to compare their relationship with that of Ty and Zane's because Nick and Kelly's stands out on its own and there's no rule that says I or any other fan has to choose one over the other. There's a different kind of dynamic that goes on between Nick and Kelly and even though they have history and years of friendship, their relationship is still at its early stages, what with the distance between them getting in the way, so they're both in that adjustment period that can sometimes be stuck somewhere in the middle of awkwardness and comfort. So much of who they are is locked into Sidewinder and figuring out what happened when the team disbanded and everyone went their separate ways could very well be key in helping Nick exorcise the numerous demons that are still lingering in his soul after all of their years in the military and the things he found himself doing after.

What this book may lack in the killing, exchange of gunfire, knife-wielding that have become a staple of sorts in the Cut & Run universe, it more than makes up for in terms of a heartrending and gut-wrenching story line. Yes, I admit it. I cried at certain points in the story, feeling just how difficult a position Nick often found himself in, but needing to do what had to be done. I remember not wholly liking Nick when he was first introduced in the Cut & Run series, and it had to do with his extremely close kinship with Ty. But I've gotten to know the man and the warrior much better over the past few books in both the Cut & Run and Sidewinder series and saying that he's grown on me is an understatement. And then there's Kelly, who may appear to be the more understanding and relaxed one in this pairing, but there's more to him than meets the eye. This third book proves that he isn't perfect, that he does make mistakes that can cut the one he loves most, but there's no doubting just how much he loves Nick and the rest of their group of friends. They both come to realizations in this book and it's the getting to those realizations that really takes a piece out of your heart, because let's face it, it's that kind of awareness that are the most difficult to reach.

So, remember early on in my review where I said this book felt like it was the end to the series? I still feel that way, and I think it mainly had to do with Nick and Kelly reaching that point in both their relationship with each other and with themselves where seeking redemption was no longer something constantly hanging over their heads as was being weighed down by the anxiety of guilt. Having the rest of Sidewinder and Zane gave the book a full circle moment, which I absolutely loved, but yeah, my heart couldn't help but squeeze at the thought that I was reading the possible end of Sidewinder. The only thing that's giving me a teeny, tiny inkling of hope was what I found at the end of both Part & Parcel and Crash & Burn. Of course, this could either be a case of wishful thinking and me holding on to the Brick & Mortar vignettes as being something more than they actually are or a case of me jumping the gun and then later realizing that I was wrong about the whole series ending. Either way, this book surpassed any and all expectations. I was in the middle of putting together my list of 2015 top reads when I read Part & Parcel, and there was no way that this year's list would have been complete without it. This is a very highly recommended five-plus star read. ♥


Read my reviews for the Sidewinder series: