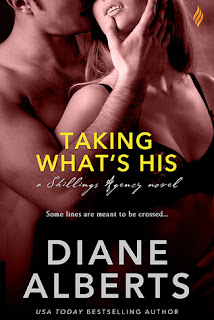 With his career as a Marine ending after an IED explosion, Holt Cunningham is more than grateful to be working for the Shillings Agency as an IT specialist. He's still feeling the effects of the explosion, but refuses to divulge his secrets for fear of being fired. So, he drowns his sorrows in alcohol and one-night stands. Having a woman sit beside him at a bar isn't a surprise, but the strawberry blonde who asks him to kiss her is. Her agreeing to a one-night stand is an even bigger surprise, but Holt's too drawn to her to turn her away, even though she does come off as innocent. When morning comes, he wants more time with her, but her sudden disappearance ends that fantasy...until he finds her again, only this time he learns that Lydia Thomas is actually his best friend's younger sister. As tempted as he is to be with her again, Holt vows to keep his distance out of respect for Lydia's brother and their friendship. But Lydia accepts him for who he is, scars and all, and for the first time ever, Holt dreams of pursuing this woman's unclaimed heart.

Taking What's His is the fourth Shillings Agency book in Diane Alberts's contemporary romance series, and I must admit that this is my favorite story so far. I loved Holt Cunningham and Lydia Thomas's love story, but I also enjoyed their individual life stories that brought much more dimension to the overall read. Holt continues to be haunted by torturous memories of his last deployment and the physical manifestations of the trauma his body received lingers. Lydia is an unexpected gift in his life, one that he isn't entirely sure how to handle, and things are further complicated when he learns that his best friend is her brother. The two have a lot of raunchy sex, but that's not the only thing that they're about. Their relationship quickly evolves in the short time they're together, and it's one that is built on trust and respect that are earned and love that's freely given. My heart broke for both of them during one crucial point, but made the expected happily-ever-after all the more satisfying. Taking What's His gets five stars. ♥