Review: Caught by You by Jennifer Bernard (Love Between the Bases #2) 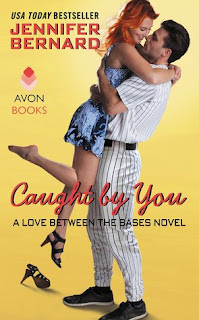 
When months of flirting finally culminated in a kiss that could be considered absolutely out of the ballpark, Kilby Catfish catcher Mike Solo and nanny Donna MacIntyre thought they'd do much more. But one phone call from Donna's ex-boyfriend changes everything. When Mike sees Donna after months of not having any contact with the fiery and flirty redhead, he's shocked to find her trying to be straight-laced and proper. Donna's doing whatever is necessary to gain primary custody of her her young son and if that means keeping putting her funny and flirtatious side on lockdown and keeping her distance from the undeniable temptation that is Mike, she'll do it. But Mike is proving to be irresistible and when he offers to help her out by getting engaged, she agrees...only it complicates an already complicated situation for both.

Caught by You is the second novel in bestselling author Jennifer Bernard's baseball romance series entitled Love Between the Bases. Readers were introduced to both Mike Solo and Donna MacIntyre in the first book and I was glad to see the best friends of the previous book's main characters finally getting their shot at happily-ever-after. My heart went out to both of them, especially since all Donna wanted was to be the best kind of mother to her soon, and Mike simply wanted his brother to be happy and healthy and accepted by everyone else. I shed a tear for these two at a couple of points in the story, but it's not an entirely sad read, especially with the banter Mike and Donna engage in regularly. Caught by You left me with a smile on my face by the end, and I'm looking forward to whatever's up next in the series. Four stars! ♥

Purchase Caught by You on Amazon | B&N | Kobo.