December 30, 2015
Karina Halle is adding another story to her bestselling The McGregors series and I'm thrilled to share to cover reveal for it, which, I must say, lives up to the four other covers for the books that came before it! Make sure to check out the blurb and pre-order links as well.

Without further ado, here's the fab cover for The Lie: 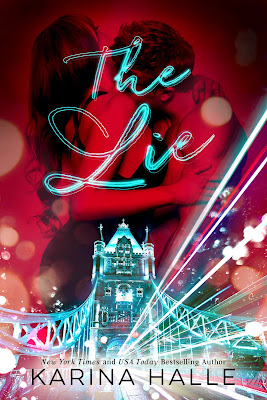 About The Lie
Their love led to a lie.
Their truth led to the end.

Scottish enigma Brigs McGregor is crawling out from the ashes. After losing his wife and son in a car accident--and, subsequently, his job--he's finally moving forward with his life, securing a prestigious teaching position at the University of London and starting a new chapter in the city. Slowly, but surely, he's pushing past the guilt and putting his tragic past behind him.

Until he sees her.

Natasha Trudeau once loved a man so much she thought she'd die without him. But their love was wrong, doomed from the start, and when their world crashed around them, Natasha was nearly buried in the rubble. It took years of moving on to forget him, and now that she's in London, she's ready to start over again.

Until she sees him.

Can you ever have a second chance at a love that ruined you?

The Lie is a second-chance romance with a dark, forbidden twist.

Add The Lie on Goodreads.

With her USA Today bestselling The Artists Trilogy published by Grand Central Publishing, numerous foreign publication deals, and self-publishing success with her Experiment in Terror series, Vancouver-born Karina Halle is a true example of the term "Hybrid Author." Though her books showcase her love of all things dark, sexy and edgy, she's a closet romantic at heart and strives to give her characters a HEA...whenever possible.

Karina holds a screenwriting degree from Vancouver Film School and a Bachelor of Journalism from TRU. Her travel writing, music reviews/interviews and photography have appeared in publications such as Consequence of Sound, Mxdwn, and GoNomad Travel Guides. She currently lives on an island on the coast of British Columbia where she’s preparing for the zombie apocalypse with her fiancé and rescue pup.