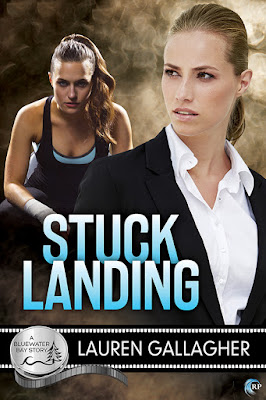 About Stuck Landing
For months, acclaimed Wolf’s Landing director/producer Anna Maxwell has been nursing a crush on Natalya Izmaylova, a former Russian gymnast and current Wolf’s Landing stunt coordinator. When Anna witnesses Natalya’s very public breakup with her boyfriend, she can’t resist inviting her over for drinks to commiserate about love and all that nonsense. Commiseration doesn’t last long, and soon Anna’s in bed with the hottest woman she’s ever touched, living out fantasies she didn’t even know she had.

Despite the amazing sex, Anna wants to proceed with caution. They’re both newly single. They’re colleagues. And there’s the not-so-small matter of Anna’s biphobia.

Natalya won’t commit to someone who clings to ridiculous stereotypes, but they can’t avoid each other at work, and there’s no ignoring their chemistry. Anna’s defenses are slowly eroding, and Natalya is willing to give her another chance. But Natalya only has so much patience, and even scorching-hot sex won’t keep her coming back forever. If Anna doesn’t come to her senses soon and let go of her prejudices—not to mention her insecurities—she’s going to lose the woman of her dreams.

Lauren Gallagher is an abnormal romance writer who has recently been exiled from the glittering utopia of Omaha, Nebraska, to an undisclosed location in South America. Along with her husband, a harem of concubines, and a phosphorescent porcupine, she remains, as always, in hiding from the Polynesian Mafia. For the moment, she seems to have eluded her nemesis, M/M romance author L.A. Witt, but figures L.A. will eventually become bored with the wilds of Spain and come looking for her. And when that time comes, Lauren will be ready. Assuming L.A. doesn't have her hands full keeping track of Lori A. Witt and Ann Gallagher, which she probably will.

Giveaway
Every comment on the blog tour enters you in a drawing for a choice of two eBooks off my backlist (excluding Stuck Landing but including titles written as L.A. Witt, Ann Gallagher, or Lori A. Witt) and a $10 Riptide Publishing store credit. Entries close at midnight, Eastern time, on December 19. Contest is NOT restricted to U.S. entries. Don't forget your email or contact info so Riptide can reach you if you win!