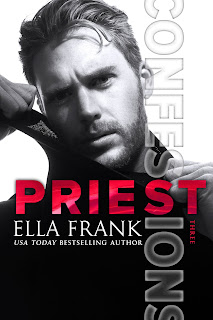 Robbie wasn't sure why, but Julien was right. With Julien, he felt a sense of wonder that someone with such a beautiful soul could love him so much, but with Priest? With Priest, Robbie felt a sense of disbelieve, beause the man kneeling before them was so guarded, so private, that Robbie couldn't believe Priest had chosen him, loved him, enought to let him—and that was truly powerful.

“Yes,” Robbie said as he let his eyes find Priest's again. “It's powerful.”

“And true,” Julien said as kissed Robbie's temple. “He's ours. Yours and mine.”

Oh my heart. This book was just... Le sigh. It's been hours since I finished Priest, and I still haven't found the write set of words that fully and aptly encompass and express how amazing this book is. Joel Priestley is one of those characters that command a reader's attention, but over the span of the Confessions series, he's more than earned many a reader's affection as well. From the moment he showed up in the Temptation series, I knew Priest had a tale to tell and holy crap, what a tale it was! Ella Frank didn't just do justice to Priest's story as an individual, but she more than did so with the story of the three enthralling men who make up this undeniably addictive MMM romance series: Robert Bianchi, Julien Thornton, and Joel Priestley--aka the Princess, the Prick, and yes, the Priest.

Just a quick reminder: these books must be read in order. They do NOT standalone, especially since the first two books end on cliffhangers of a sort. You don't necessarily need to read the Temptation books, but all three main characters are introduced there, with Robbie playing a bit more of a significant role in the lives of Logan Mitchell and Tate Morrison and then Priest becoming a law partner to Logan and Logan's brother. I'm a wee bit biased since the Temptation series is one of my all-time favorites, and Logan and Tate hold a special place in my heart, so naturally, I'm going to recommend you check their story out. However, you're not going to feel like you're missing anything if you decide to skip it for now or wait till you're done with Robbie, Julien, and Priest's own set of novels.

Priest picks up immediately where Julien left off, and as far as Joel Priestley is concerned, he knows he made a mistake holding off on telling Robbie Bianchi the truth behind his identity and his past. Priest's husband believes all Robbie needs is time to wrap his head around what he just found out, but maybe it's wishful thinking on Julien's part. Robbie's fallen for his two boyfriends, but he can't help but wonder if this revelation regarding Priest is just another indicator that maybe he's bitten off more than he can chew...that maybe he's place in this three-sided relationship isn't on as equal a footing as he was made to believe. But the love these three men share is strong, and when confronted by a formidable enemy, hell hath no fury like the Priest protecting his Princess and his Prick.

If I didn't already love Priest before reading this book, I would have totally fallen for him here. The guy truly is loyal and loving but he's proven to be absolutely lovable as well, which may be surprising to those who've only encountered him in the Temptation books. The relationship between Priest, Julien, and Robbie is tested time and again throughout the series, but not as much as it was here in book three. I don't want to give away any spoilers, but there were moments in the book where I held my breath worrying about these guys. Yes, I knew they would overcome any and all foes and challenges, but goodness, they were put through the wringer. That little surprise at the very end? Gah! Absolutely squee-worthy! Priest gets five-plus stars, and Ella Frank delivers yet another winner.