Review: Bitten by Her by Annabelle Jacobs (Regent's Park Pack #4.5) 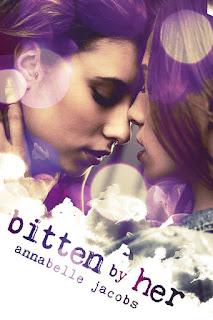 Annabelle Jacobs takes fans and readers back to her Regent's Park Pack series with an F/F novella featuring the two daughters of alphas whose unexpected connection is met by the disapproval of one father who threatens war between the packs should his edict be broken. When Sara Gallen decides to become a part of her father's pack, she does so with nothing more than the desire to forge closer relationships with her alpha father and her brothers, the same sort of closeness she shares with her mother and grandparents in her grandfather's pack. While on a run, she's lured by a scent that she desperately needs to get closer to. She comes across Rachel Tregarrak, the daughter of the Penwith Pack's alpha and a beta herself. The desire to mate is strong between the two of them, but they know that the least they should do is inform their respective alphas. Unfortunately, Sara's father puts his foot down and refuses to give his blessing to any mating, believing Sara should be with a male mate and carry on the line. Torn apart in the hope that their bond will fade, Sara and Rachel can only hope for some sort of intervention.

Rachel and Sara's story is mentioned in snippets in Bitten by the Alpha, so I'm glad that we get the full story plus a satisfying resolution in the form of this novella. I was intrigued by the idea of the children of two alphas from two different packs becoming mates, and Sara's father's hard-line stance and very antiquated and misogynistic views definitely pushed this story forward. The forced separation added to both the sexual tension and the anticipation as to how everything will ultimately play out and be resolved. I liked the interactions that Rachel and Sara had, and while they were limited due to the fact that they were not allowed to be together, these two certainly had chemistry every single time they were within vicinity of each other on the page. One of my favorite things about this book had to be Sara's grandmother, Alpha Celia Cornell. Can I just say that I love the fact that the female alphas in the entire series were forces to be reckoned with? It was also great seeing familiar characters and couples from the series. Overall, Bitten by Her was a really good addition to this fab series, and one that receives 4.5 stars. ♥

Read my reviews for the Regent's Park Pack series:

Purchase Bitten by Her on Amazon.