Review: Until You're Mine by Cindi Madsen (Fighting for Her #1) 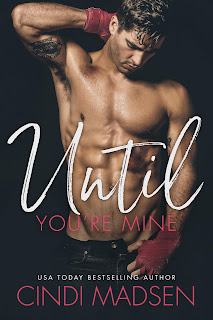 Cindi Madsen has taken on the MMA romance sub-genre and is off to rather impressive start with Until You're Mine, the first in her brand-new Fighting for Her series released under Entangled Publishing. Set in San Diego, California, the series focuses on the Roths, a family whose patriarch heads Team Domination and owns a gym known for its MMA training. While Liam and Finn are both active in the gym as trainers, youngest sibling Brooklyn chose to pave her own way and that meant moving from Southern California to up north to pursue her art studies.

When Brooklyn's asked by Finn to return for the summer before her possible internship in San Francisco. The gym is floundering and disorganized, and while Brooklyn isn't thrilled at the idea of being that far from her boyfriend and the life she's created for herself, she agrees. Being around the father who never put her first is bad enough, but to have the constant temptation that is Shane Knox, an MMA fighter who was once a title contender but is now resurrecting his career. They should stay away from each other, but Shane intends to fight until Brooklyn's his.

As palpable as the chemistry was between Shane and Brooklyn, theirs was a slow burn romance, thanks in large part to her being in a relationship and her past with her first love who just happened to be an MMA fighter as well plus Shane being grateful to the Roth men for taking him on as part of Team Domination and not wanting to mess that up being pursuing Brooklyn. It was way too easy to like these two, what with their banter and strong personalities hiding the bits of hurt and insecurity lingering within. Oh, and have I mentioned how hot they were?

Add to the whole we-shouldn't-but-let's-be-honest-here-we-will romance part of the book the stuff going on with the rest of the Roths. There's Brooklyn's tense relationship with her dad and then Liam's refusal to acknowledge that he's miserable without his best friend around. It seemed as if it was only Finn who was doing well, but then you never know what that easygoing nature of his could be masking. Liam's story is up next, and it's a friends-to-lovers one, so I'm definitely looking forward to that, meaning Finn's book will be the last one for Madsen's trilogy.

I like it when an author tries something new because when done well, their readers reap the rewards. Cindi Madsen has done a sports romance series before--i.e. her Taking Shots hockey romances which I loved--but those were set in college, and here we've got a more "real world problems" feel to it. Shane and Brooklyn headlined a cast that had a couple of peripheral characters piquing my curiosity, so it shouldn't surprise anyone that I'll be on the look out for the rest of the Fighting for Her series, thanks to a strong five-starred start from Until You're Mine. ♥

Purchase Until You're Mine on Entangled Publishing | Amazon | B&N | iBooks | Kobo.