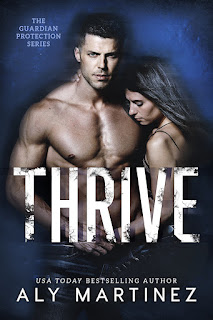 It's been almost a year since bestselling author Aly Martinez released the first novel in her Guardian Protection series, but she's made sure to make the wait worthwhile because Thrive was a step above series starter Singe. While book one was an overall good read, everything about this second one felt as if Martinez had ramped it up, giving readers a more intense story with stronger and more developed main characters. This can be read as a standalone, but if you're like me, I'm going to recommend that you read the books--Singe then Thrive--in order since there are recurring characters and for you to have a better feel for this private security as a whole.

Book two is a second-chance romance that begins as a love triangle among best friends Jeremy Lark and Kurt Benton, both twenty-three and in the military, and Mira York, nineteen and Kurt's girlfriend who fell in love with Jeremy and he with her in return. When Mira had to choose between the boy she loved first and the one who owned her heart, Jeremy's military career was in tatters as was his heart. Seventeen years later and with nary any sort of communication among the three, Jeremy is part of Guardian Protection, has two daughters who are his world, and is surrounded by men he considers brothers. Then he receives a desperate phone call...from her.

Some of you may find this weird, but one of my favorite things about this book was Jeremy's not wanting to have anything to do with Mira after she reached out to him. It was honest-to-goodness animosity on his end. After all, this was the woman who broke him after she chose his ex-best friend who also happened to be the same guy who she found out was cheating on her. Another thing I liked was the wariness that was so prevalent between the two of them. I know, I know. These are negative emotions, but remember that these two had history, and while most of it was good, it's the not so good that's lingered over more than a decade and a half.

The romance aspect was nearly perfectly balanced with the suspense aspect, something that isn't always a given when it comes to this particular sub-genre. When they were first together, he was Jeremy, but he became Lark when he made the choice to not only survive his circumstances but to truly thrive. These two had a lot to overcome if they had any shot at a happily-ever-after, but with someone clearly demanding her participation in illegal acts, the man Mira has entrusted her life to has to be both Jeremy and Lark--the man that she loves and the man who will stop at nothing to protect her. Fast-paced and well-written, Thrive was a five-plus-star winner. ♥

Read my reviews for the Guardian Protection series: