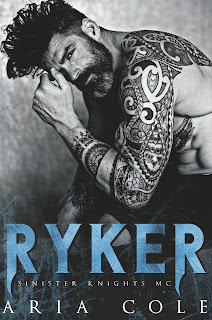 I do believe I've just found myself my favorite Aria Cole read so far! Ryker is the first in her brand-new Sinister Knights MC books and not only does it have a different feel from her previous releases, but it opens the door for characters that I can't wait to get to know better as the series moves forward. This is a second-chance love story of sorts with a hint of a May-December to it. It's been three years since Anna Kloss last saw Ryker Bennett. She blames herself for his time in prison, the guilt getting to her even more because he's chosen to remain silent, not answering any of her letters, communicating instead with his brothers in the Sinister Knights Motorcycle Club where Anna's father is the president and Ryker his VP. She has spent her time pursuing the degree that she's now just six months away from getting. With Ryker's release, Anna isn't sure if it'll be a chance for them to pick up where they left or if Ryker has already cut his losses and moved on. With their eleven-year age difference, her father's disapproval, and neither one feeling worthy of the other, could there love be doomed to crash and burn?

As always, Aria Cole gives readers a quickie read, but this was a rather satisfying one, if I do say so myself. I don't recall either Anna's or Ryker's age being mentioned, but I'm guess with Anna nearly graduating from college that she's in her very early twenties, which would make Ryker in his early thirties. I could imagine why Ryker was torn between treating Anna like an innocent girl and having his way with her, but when he got over his hang-ups, these two proved that the sexual tension between them was a mere precursor to the "real" thing. My one wish here was that there was more of an in-depth look at the inner workings of the club itself. Yes, they're not one-percenters, but I guess I wanted to see what it was they did rather than find out belatedly when Ryker would tell Anna. This being a series starter, we get a peek or two at Ryker's best friends who are also part of the MC, and both of whom I'm guessing will get their own stories in the series. I wouldn't say no to Anna's father having his time in the spotlight as well! Overall, I really liked Ryker, and will be keeping an eye out for the rest of the novellas. 4.5 stars. ♥