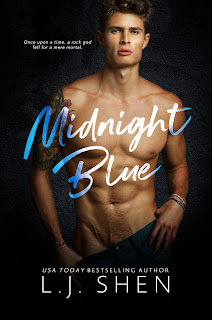 He may have looked beautiful, but it was important to remember that Alex Winslow was not, in fact, boyfriend material. Or anything-material. What he definitely was was: rude, impatient, a bully, and a recovering drug addict.

And here I was thinking L.J. Shen couldn't possibly outdo the reading experience she gave me with her Sinners of Saint series, which just happened to be one of my top series of 2017. This novel! Gah! If the previously mentioned series took a piece of my heart one book at at a time, until each guy had a quarter of it to do with it what they wanted, all it took for Alex Winthrop and Indigo Bellamy was a little over three hundred pages to eviscerate it before eventually gluing it back together. A barely living legend in the music world who seems to be lock in for the mythical 27 Club and a somewhat innocent yet wary twenty-one-year-old tasked to be his sobriety companion slash unwilling keeper slash unwitting target of blatant sexual planning and plotting by the filthy-mouthed rock star. This is the stuff the best kind of rock romances are made of, even if I only figured it out while reading this fab book.

Globetrotting with an infamous rock god and his band and manager while earning an exorbitant amount of money may not seem like too much of a hardship for most people, but then they probably never had to watch over someone like Alex Winthrop. The man is a prince among pricks, and he makes no apologies for it, choosing instead to poke and prod at his agent's latest selection to be his proverbial ball and chain for three months during a world tour. But if Alex thought Indigo Bellamy, the girl with the icy blue hair and big blue eyes, was going to be a pushover that would be scurrying back to wherever she came from, he had another thing coming. Soon, he finds himself making midnight meetings along hotel hallways with her, using her as his muse while reminding her that he intends to take her to bed once she realizes she can't resist him. This isn't love. It's nothing more than lust. Right?

With Indie and Alex, I've finally found an M/F book couple that I couldn't get enough of. These two were as entertaining as ever. There were times I desperately wanted to shake Indie and beg her not to give in to Alex and all his rock hotness, while other times I wanted to glare at her and ask why they hell she was resisting him. And then there was Alex, who was every bit an entitled asshat. Yes, the guy was an unbelievably gifted musician and artist, but goodness, how he grated on my nerves at times. And then... the layers started to fall to the wayside, one at a time, and not always all the way, but the wait? Damn, he made it worthwhile because the real Alex? The one that isn't onstage and under the spotlight, pressured to perform and live up to the expectations of his fans and give the finger to his critics? He had a beautiful and generous soul that Indie recognized deserved to be loved forever.

I lost count of how many highlights I made on my Kindle while reading this, just like I lost count the number of times I squeeed and swooned. I laughed but I also got a wee bit teary-eyed at a couple of points because these two main characters had heartrending back stories that have played a part in what motivates them. They also happen to be backed up by a small but constant and unerringly vital in making this an even better read. Hands down, my favorite peripheral character had to be Lucas Rafferty, Alex's drummer and closest friends, albeit the two have a strained friendship even in the best of times. The author could have used him in the way many would have probably expected, but this is an L.J. Shen-penned novel, and thank goodness because I crave extraordinary. Same goes for a the side stories peppering this book. Midnight Blue is, hands down, Shen's best to date. Five-plus stars. ♥